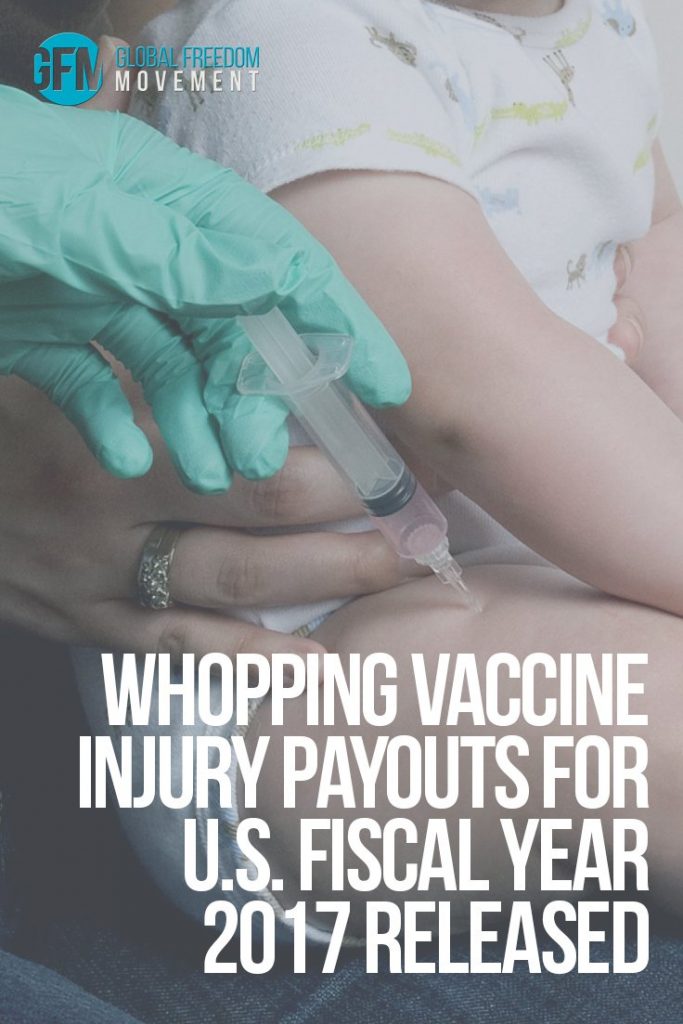 Over $3.6 Billion Worth of “Safe and Effective”

Yet another shocking blow has been delivered to people who still ardently claim that vaccines are “safe and effective,” and that the only complications they can cause are “mild.” The US government department for Health Resources and Services Administration has recently released the running tally of the just-past-half-way-complete US Fiscal Year of 2017 for compensable vaccine injuries. Vaccine injury payouts currently stand at over $142 million dollars. You read that right. That covers the 377 cases that were thus far successful in obtaining compensation in FY 2017 through the heavily biased (to put it politely) system allegedly in place to redress damage done by vaccines in the USA.

At the rate things are going, we might expect the Vaccine Injury Compensation Program to pay out around $220 million or more by the close of FY 2017. To clarify, US Fiscal Year 2017 runs from October 1st, 2016 to September 30th, 2017 – there’s still over four months remaining to rack up more carnage.

The National Childhood Vaccine Injury Act of 1986 was created to “reduce liability and respond to public health concerns.” It granted immunity to pharmaceutical companies and prevented parents from suing vaccine makers for vaccine injuries or death. What other industry has such exceptional standards applied to it? Why the special privilege a.k.a. license to injure and kill with impunity?

According to the CDC’s website, there are “limitations in our knowledge of the risks associated with vaccines” and vaccinations have “the following problems”:

The above very revealing admissions from the US Centers for Disease Control (CDC) completely undercut the pathological overconfidence exhibited in the extreme portions of the community pushing for mandatory vaccination.

Similarly, the Vaccine Injury Compensation Program (VICP) compensation numbers are, not only not reassuring, but, frankly astonishing, and should give not just all parents, but all people in general, serious pause. If vaccines are “safe and effective” as our medical practitioners and politicians constantly tell us via mainstream media outlets, then why are there already over 370 compensated cases in fiscal year 2017? Why is there a running payout total from 1988 up to now of “around $3.6 billion,” according to the US Health Resources and Services Administration?

Why, if vaccines are just so gosh darned safe, does the HRSA government website state (see image above) that, “Since influenza vaccines (vaccines administered to large numbers of adults each year) were added to the VICP in 2005, many adult petitions related to that vaccine have been filed, thus changing the proportion of children to adults receiving compensation”?2

It seems to make some sense that the true purpose of the Vaccine Injury Compensation Program is simply to pay lip service to justice and decency, while allowing pharmaceutical companies to receive a minor slap on the wrist (largely in the form of bad PR) before they go right on with business as usual – “pay to play” or something like that (but then I’m a cynic.). The economic losses are affordable and “worth it”; the human losses are an inconvenient public relations issue to be “managed.”

So Many Questions, So Few Answers

Why, if “many” fully grown adults are seeking vaccine injury payouts should we make the blanket assumption that these same vaccines will be “safe and effective” for babies and small children? The doses are not weight adjusted. No vaccines are weight adjusted to account for the much smaller and more fragile physiology of a baby. Why? Why does a baby receive the same amount of heavy metals, carcinogens, and the many other toxic ingredients (such as polysorbate-80) that a full grown 200 pound man receives? Where else in medicine is such a lack of dose control not only tolerated, by blindly promoted and held as sacred?

Why are we not seeing any double-blind randomized controlled trials with true placebo groups demonstrating clearly and honestly that flu (or other) vaccines are safe and not causing children any harm – as well as being “effective”? Until 2005, based on the HRSA document, the ONLY petitions filed for flu vaccine injuries were on behalf of vaccine injured children. Where are those safety studies again? Where are the weight adjusted doses again? Why isn’t anyone taking up RFK Jr’s $100,000 mercury challenge if mercury-containing vaccines are so demonstrably safe? Why, why, why, Mr Anderson?

A recent peer-reviewed study published in the Pace Environmental Law Review looked at cases of vaccine injury that have been monetarily compensated by the VICP.

The study investigated approximately 1300 cases of childhood brain injury as a result of vaccines in which the Special Masters ruled for the plaintiffs, looking for references to autism, symptoms of autism or disorders commonly associated with autism. It reports that twenty-one cases actually stated “autism or autism-like symptoms” in the court records.  The researchers then identified and contacted 150 more compensated families to find out whether the children had autism.  They were able to find an additional 62 cases (greater than 40% of their sample) for a total of 83 cases of autism.  In 39 cases (47%) there was confirmation of autism beyond parental report.3 (Emphasis added. Autism is a proven vaccine adverse event. It is also listed in vaccine inserts as one of many possible abreactions.)

Since 1988, when the Vaccine Injury Compensation Program began, 5,353 petitions were assessed as compensable out of the 18,072 filed since then. Nearly 1-in-3 is actually fairly impressive, given the incredible medical, social, and legal bias against recognizing vaccine harm when it occurs, as well as the determined efforts by pharmaceutical companies in court to distort reality and manufacture false doubt in defending their products and controlling perception.

This doesn’t look good at a time when proponents of removing freedom of health choice are campaigning for “no jab no fly” policies that would prevent much of Australia from functioning (particularly economically). This fear-mongering and vaccine hysteria is all the more absurd when one pauses to consider that in Australia, as in the US, the clear majority of adults are FAR from being “up to date” with their shots – and have been for decades. We simply don’t worry about it. And yet, the much-feared epidemics never seem to materialize. In fact, most outbreaks seem to follow in the wake of intensive vaccination campaigns – but that’s just a coincidence, right? Just as it’s a coincidence that within hours of getting your baby home from the doctor’s surgery they were seizing, turning blue, and in the nascent stages of encephalopathy…Right?

Because clearly, after $3.6 billion dollars worth of legal payouts in the US alone since 1988 – and with adverse events being under-reported (in the VAERS) to the extent of 90% or more, and with mature adults and children alike being injured by flu (and the other) vaccines to the extent of requiring compensation, clearly, vaccines are simply “safe and effective.”

Logically, if we mandated vaccination across the board, the only possible outcome is an explosion of vaccine injuries and people seeking compensation. It’s simple math. More vaccines means more vaccine injuries and deaths. Aside from the immeasurable human psychological cost and loss of quality of life, who is going to fund the payouts? Is Big Pharma stepping up to the plate and preparing to own the harm it is causing? Not likely, since pharmaceutical companies are legally immune (at least in America). Vaccine Injury Compensation Program funding comes from an excise tax charged on each vaccine:

The [VICP] Trust Fund receives its money from a 75 cent excise tax on vaccines recommended by the [CDC] for routine administration to children. The excise tax is imposed on each dose, or preventable disease of a given vaccination. (central-pennsylvania.legalexaminer.com)

This reminds me of the carbon tax, which essentially allows “polluters” to simply pay a tax/”penalty” for their emissions and continue with business as usual. It isn’t a deterrent at all for vaccine manufacturers. They would factor it in to their costs of operating.

In September 2014, the CDC notified federal vaccine advisory committees that soon they will no longer be accepting vaccine adverse event reports via phone, fax, or mail. Instead, officials have stated that they will only accept electronic reports of vaccine reactions, injuries, hospitalizations, and death. (vactruth.com)

According to VacTruth, “70 percent of VAERS reports are still filed the old-fashioned way, handwritten and submitted via mail or fax. A mere 30 percent of adverse event reports are submitted to VAERS online.”4 Therefore, the change to adverse event reporting seems designed to make it harder to keep accurate tabs on the true number of significant vaccine injuries by discouraging reporting them in general. Some parents dealing with a severe abreaction in a child may also be too overwhelmed and distressed to have the time or inner resources to file a report, a fact few people even consider. Other factors make obtaining compensation even harder:

…certain adverse reactions from vaccines have been removed from the injury tables, including encephalopathy (swelling of the brain) and seizure disorders resulting from specific vaccines, two very common adverse reactions…and autism as a primary injury. Injuries from anthrax and smallpox vaccines are not covered under the NVICP…Parents who file a report with VAERS must file a separate report if they wish to seek compensation for their child’s vaccine injury or death. Furthermore, if your child was hospitalized from a vaccine, but they did not require surgery, you would not be able to file a claim seeking compensation, unless you can prove with certain kinds of evidence that the effects of the injury have lasted longer than six months.5

You also need an attorney to file on your behalf. And did you know that injury claims may take from two to ten years to resolve through the Vaccine Injury Compensation Program? Imagine being a bereaved parent and pondering that life-sucking prospect. The system is very clearly weighted against any kind of justice for vaccine-injured people. This is why I say that nearly 1-in-3 cases receiving compensation so far is actually quite an achievement – all things considered.

You may support blanket vaccination on the way IN to the doctor’s surgery, but you may not support it so much when your child is brain-dead (or just dead) 72 hours later. It happens. I personally know many vaccine-injured people – so many I’ve lost count. My partner is one (thank you very much, Gardasil). The media hides it. Politicians lie about it. Doctors parrot fallacious medical dogmas without thinking. Big Pharma continues doing what Big Pharma does best: poisoning us while we pay them for the privilege.

The x-factor is YOU, the wild card, the ghost in the machine, the one who can stop, think, and say “NO.” You have the power to recognise something that doesn’t make sense and to try a different way – and if you have children then, more to the point, you have the responsibility.

Next fiscal year, let’s aim for $0 in vaccine injury payouts through 100% non-compliance – meaning no vaccine injuries and deaths at all – and a public that understands REAL disease risk and how to actually be resistant and robust rationally. Wouldn’t that be something?