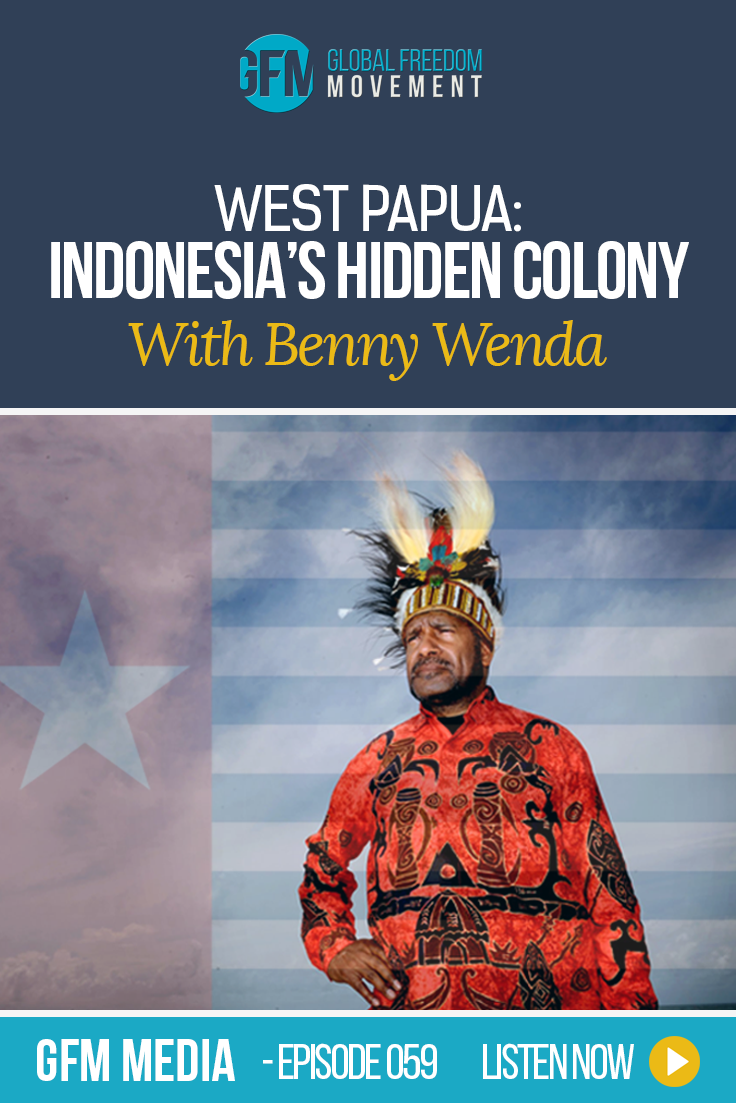 The people of West Papua have been suffering under Indonesian occupation since 1963. Over 500,000 civilians have been killed, and thousands more have been raped, tortured and imprisoned. Foreign media and human rights groups are banned from operating in West Papua, thus silencing and censoring their stories from the world’s ears.

The global community, including governments, politicians, academics, and human rights organisations, has a right to know, and a responsibility to mitigate the decades of psychological terror and physical trauma experienced by West Papuan individuals and communities at the hands of Indonesian security forces. A crucial step in this direction would be to end any type of training or funding by Australia of Indonesia’s elite special forces, Kopassus in particular. As recently as September 2010, Australia’s elite SAS forces were involved in counterterrorism training with Kopassus in Indonesia, which directly implicates the Australian army and taxpayer in the horrendous suffering of the Papuan people. 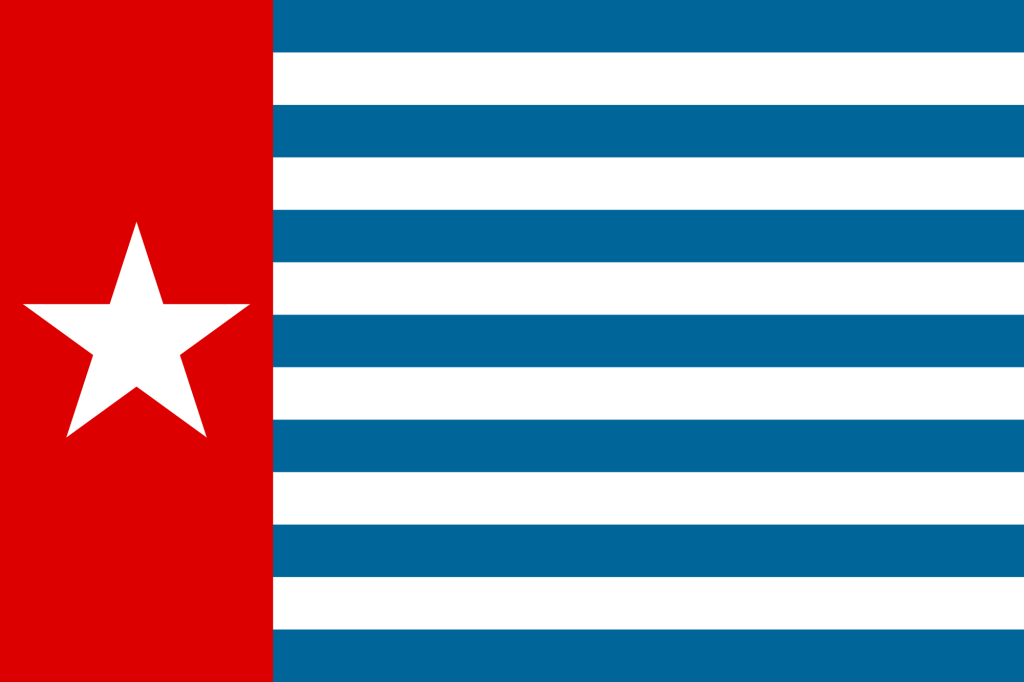 Benny Wenda is a West Papuan independence leader, International Spokesman for the United Liberation Movement for West Papua (ULMWP), and founder of the Free West Papua Campaign. In 2003, he was granted political asylum by the British Government following his escape from custody while on trial in West Papua. He now lives in exile in the United Kingdom.

Raised in the remote highlands of West Papua in the 1970’s, Benny Wenda ‘lived at peace with nature in the mountains’. In 1977, the Indonesian military appeared in his village and changed his live forever. Violence, racism and enforced subservience became part of daily routine.

Between 1977 and 1983 Benny and his family, along with thousands of other highlanders, lived in hiding in the jungle. Life was hard. Food and shelter were scarce, and the weak struggled to survive the harsh conditions. Military violence remained a constant threat. In one particularly harrowing incident, coming across Benny’s family in the jungle, soldiers ripped Benny’s two-year-old cousin from his aunty’s arms and threw her to the ground with so much force that the child’s back was broken. They then raped his aunty, forcing Benny to watch. His small cousin died two weeks after the attack; his aunty sometime later from her own injuries.

As a small boy, Benny could not understand why the Indonesian military was doing this and, still, he had no knowledge of the context in which this violence took place. Years later, he still did not understand. Benny searched widely for information about Papua’s history, culture and identity. It was a difficult task—books were censored, propaganda was rife—but he made it his mission to uncover the truth. 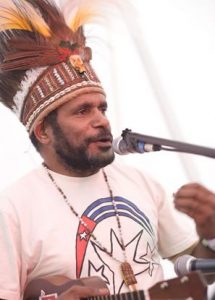 Over the years, as the violence of the Indonesian occupation increased, and the desire to silence West Papuan freedom fighters escalated, Benny faced criminal prosecution for a crime he did not commit—he was not even in the country at the time the alleged attacks took place. It was obvious that Benny would not receive a fair trial. Rumours were rife that military intelligence would kill him in detention before the judge rendered a decision.

In miraculous circumstances, Benny escaped from Abepura prison on 27 October 2002. The Indonesian police allegedly issued a shoot to kill order. But aided by West Papua independence activists, Benny was smuggled across the border to Papua New Guinea and later assisted by a European NGO to travel to the UK where he was granted political asylum. In 2003, Benny and his wife Maria were reunited in England, where they now live with their children.

Benny holds a deep and enduring belief that justice will eventually prevail, and he sees his remarkable escape from persecution in Indonesia as testament to that fact. ‘While my people continue to suffer and continue to die, nothing will stop my campaign’, he says.

For Benny Wenda, there is only one way to stop the killing, and ensure that Papuans enjoy the same freedoms that people elsewhere in the world already enjoy: Papua must be independent. And to that end he continues his campaign.

Please join us on Global Freedom Movement Media, as we welcome the brave and courageous Benny Wenda, a man who has endured more than any human should. Help us Free West Papua.

“We have grown from being a volunteer organisation through to having permanent offices in Oxford (UK), The Hague (Netherlands), Port Moresby (Papua New Guinea) and Perth (Australia). We are a group of people from human rights, political and environmental backgrounds, a number of whom have spent time in West Papua. Our leadership comes from Papuan representatives here in the UK, and in West Papua itself.”

TAPOL’s “The Practice of Torture: Business As Usual in Papua” Report – The case studies in this report provide but a small example of the much broader patterns of violations that have occurred and which continue to take place until today in Papua. The cases demonstrate entrenched impunity for torture involving state actors.

The Indonesian government has not demonstrated a serious commitment to recognize the truth about the widespread use of torture by state agents, prosecute perpetrators, prevent the recurrence of torture or other violations, and offer reparations to victims. Torture has become embedded in the functioning and culture of the state security apparatus after the transition to democracy.

Report: The Environmental impacts of Freeport-Rio Tinto’s copper and gold mining operation in Indonesia – June 2006 – This report presents a new and independent picture of the environmental impacts of the Freeport mine, a Freeport McMoRan and Rio Tinto joint venture, which although one of the largest mines in the world, operates under a shroud of secrecy in remote Papua province.

This report documents severe environmental damage and breaches of law, based on a number of unreleased company and government monitoring reports, including an Environmental Risk Assessment (ERA) commissioned by Freeport-Rio Tinto and presented to the Indonesian government, but not made available to the public. 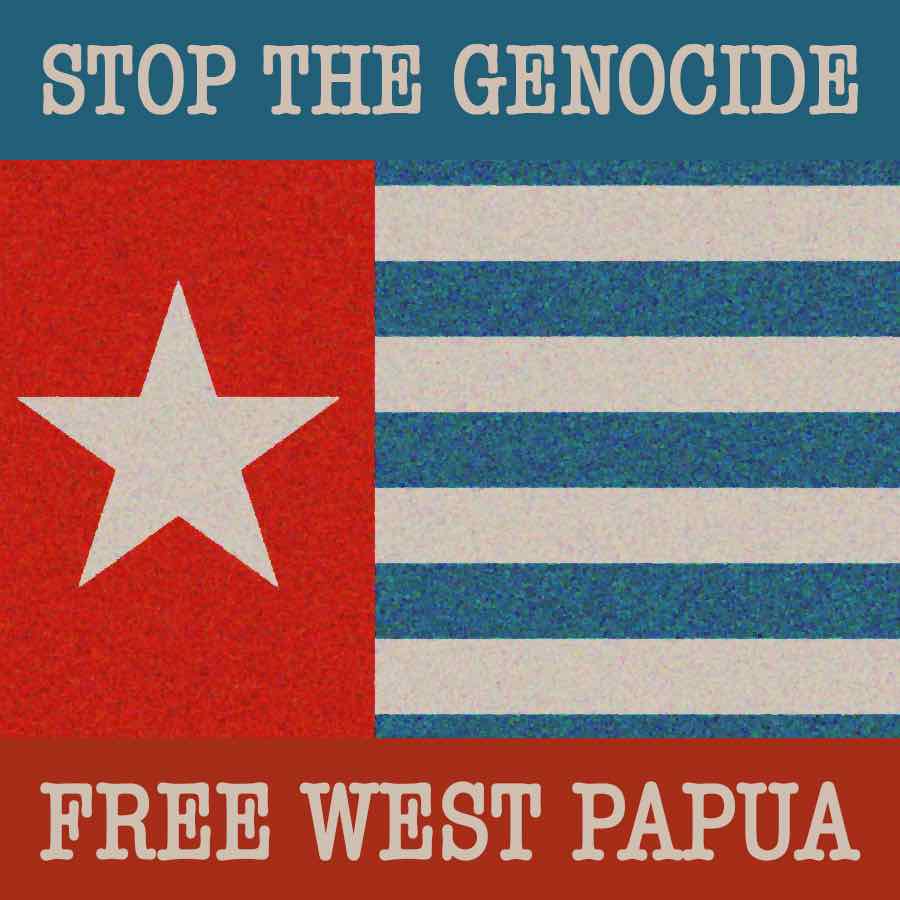 Stop The Genocide: Free West Papua Facebook Profile Picture – Please join us in changing your Facebook profile image to this image. We have included recommended text below with hashtags for ease of sharing. (Click on the image above to be taken to a hi-res version).

The Indonesian government continues to deny the truth about the widespread use of torture in West Papua by state agents and the Indonesian military. The world needs to know that the ongoing genocide is happening TODAY, and is being supported by western countries (including Australia) and their taxpayers.

“I saw soldiers order women to take off their clothes and then walk naked before them. Soldiers forced them to become sex slaves every night. Not just at night, but also during the day soldiers took women they liked and made them walk through town with no clothes. I saw it but couldn’t challenge them or become angry because they had guns. The people of Ayamaru couldn’t complain. They only watched what the soldiers were doing to their daughters.”
– Konstan Atanay, Sorong (1965)

“On the way from the school to the police station, I was forced to drink water from a pond in the middle of the road, from 9am -12 pm. Earlier, one soldier would stir the pond so the water would turn brown. Then I was taken to the police station and detained for one week. During the period of detention I was tortured. I was electrocuted and beaten until my head was bleeding.”
– Frans Adolof Arfusau, Biak (1982)

“Five officers raped me in the military detention centre alternately. I was finally unconscious. My vagina was torn and I received 12 stitches. I felt trauma and shame.”
– Naomi Masa, Jayapura (1983)

“Then, the officers burned a large candle and inserted it into my vagina. They slashed from the vagina towards the buttock. I was bleeding from my genitals. We screamed but couldn’t do anything. Our hands and feet were tied. They also lit a cigarette. It was like I was going to die. I heard the sound of boots passing, kicking and stomping all over our bodies.”
– Tinneke Rumbaku, Biak (1998)

“Two police officers and one army officer took turns kicking and beating me. The army
officer electrocuted me in the mouth. My hands were tied to my back and I was electrocuted repeatedly.”
– Peneas Reri, Sasawa military raid case (2014)

For more details, please read The Practice of Torture: Business As Usual in Papua: https://www.tapol.org/news/practice-torture-business-usual-papua 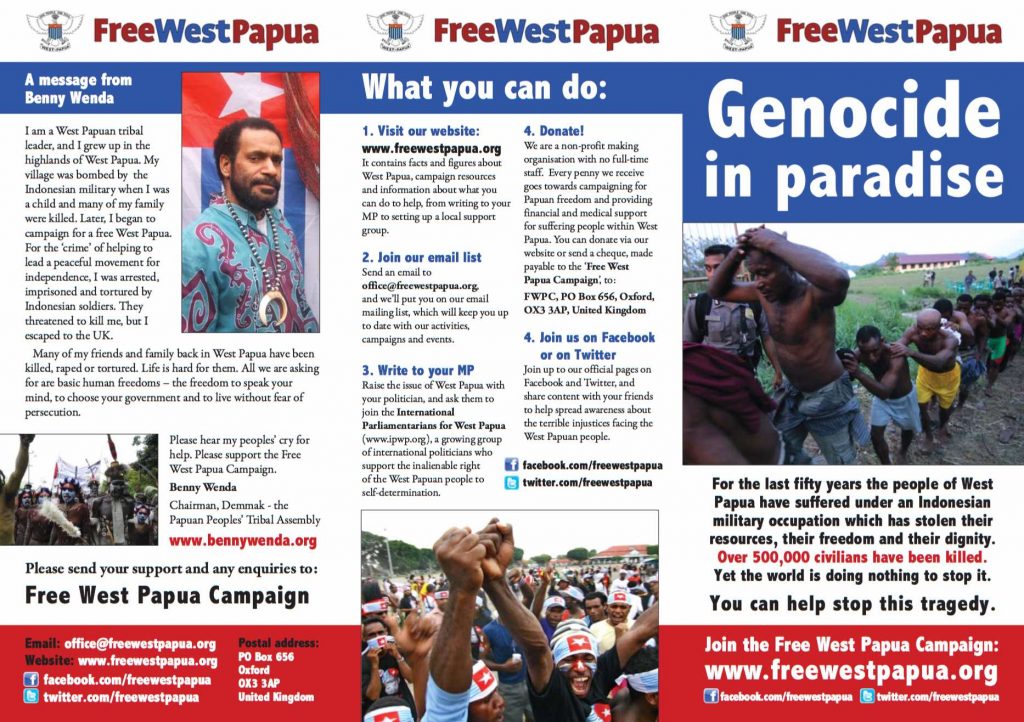 Free West Papua Campaign Boycott BP Leaflet – Click on the image below to download and print a full-size flyer to share with friends and family, and paste in public areas… 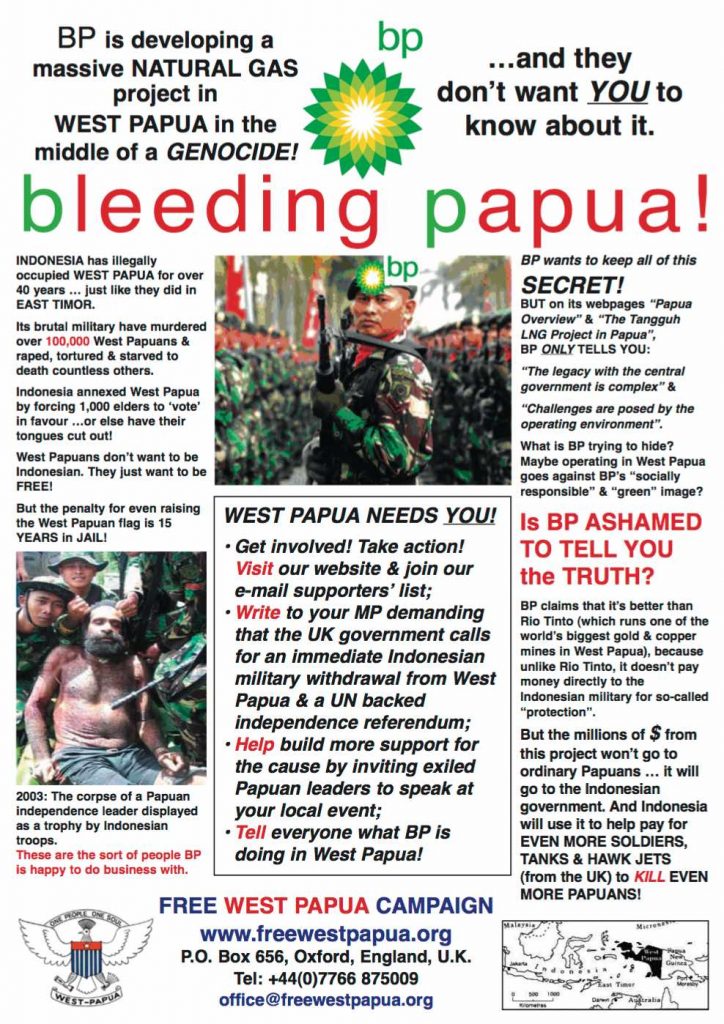 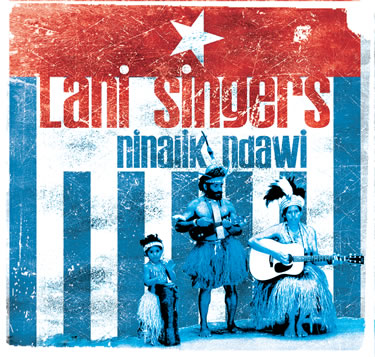 Films – A selection of documentary films, providing first-hand evidence of the situation in West Papua.

Music – A selection of music releases that have been created featuring West Papuan and international artists to raise awareness of the struggle.

The Lani Singers – Music by Benny Wenda, wife Maria, and their children, as Lani Singers.

Campaign Materials – A selection of print-ready and download campaign materials including leaflets, letters, postcards and posters.