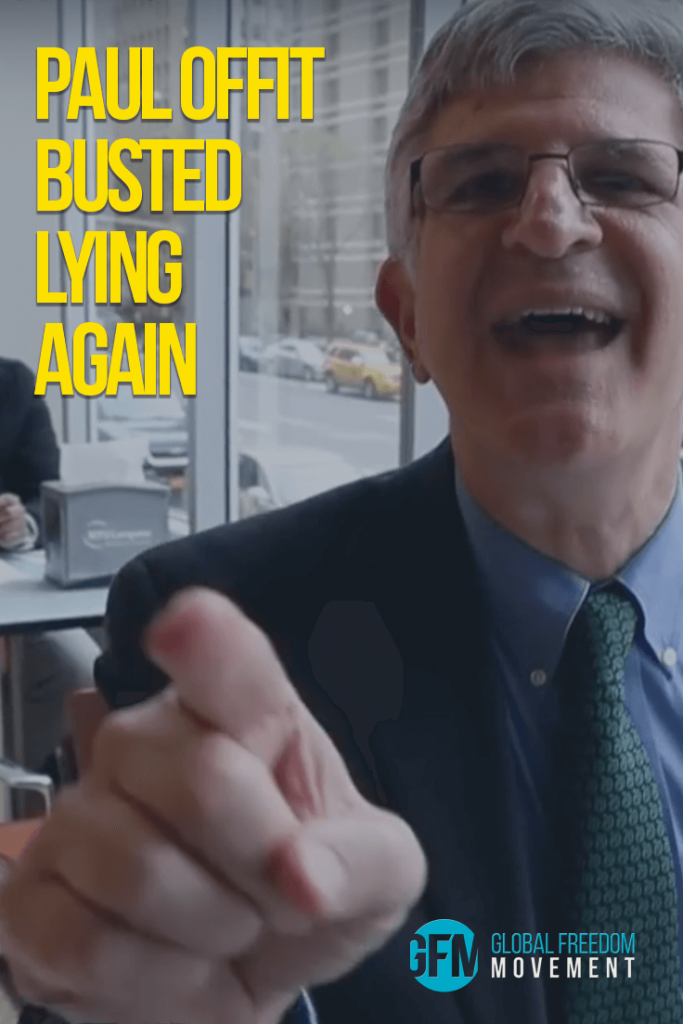 Long time vaccine apologist and vaccine patent holder Dr Paul “Profit” Offit has just been recorded on camera refusing to be interviewed by anyone with the Vaxxed bus by responding with: “Get outta here. Get the fuck outta here.” Charming.

Why does it matter?

This is the same man who has claimed in published literature that each infant would have the theoretical capacity to respond to about 10,000 vaccines at any one time, that is, 10,000 vaccines simultaneously! (He is also quoted as having expanded the figure by an order of magnitude to 100,000.) Offit also just happens to hold a patent on a rotavirus vaccine (Rotateq) and has already pocketed over $10 million from it, through 2009, according to analysis by Olmsted and Blaxill.

The safety claim(s) made by Dr Profit has no relation to empirical reality at all and is purely derived from witches and broomsticks territory, but that has not stopped various establishment medical centres from parroting this drivel in vaccine promotions – and doing it out of context too. So, let’s hear from the man himself if he’d be willing to discuss his beliefs in polite conversation…

Are you surprised by what you just saw above? I’m not. It’s the same condescending, arrogant, and aggressive attitude we investigators are so accustomed to seeing from public figures pushing the li(n)e about “total vaccine safety” and “no risks.” There’s also the nasty habit of lying. On April 18th, 2011, the Orange County Register posted the following corrections to a piece they ran on August 4th, 2008 featuring a number of inaccurate statements Profit made.

Unsubstantiated statements include: Offit’s claim that Attkisson “lied”; and Offit’s claim that CBS News sent a “mean spirited and vituperative” email “over the signature of Sharyl Attkisson” stating “You’re clearly hiding something.” In fact, the OC Register has no evidence to support those claims. Further, Offit told the OC Register that he provided CBS News “the details of his relationship, and Children’s Hospital of Philadelphia’s relationship, with pharmaceutical company Merck.” However, documents provided by CBS News indicate Offit did not disclose his financial relationships with Merck, including a $1.5 million Hilleman chair he sits in that is co-sponsored by Merck. According to the CBS News’ documentation recently reviewed by the OC Register, the network requested (but Offit did not disclose) the entire profile of his professional financial relationships with pharmaceutical companies including: The amount of compensation he’d received from which companies in speaking fees; and pharmaceutical consulting relationships and fees. The CBS News documentation indicates Offit also did not disclose his share of past and future royalties for the Merck vaccine he co-invented.

Offit claims that he was feeling “unnerved” and “ambushed” by the Vaxxed crew in the below social media post (which features the usual distortions of reality): 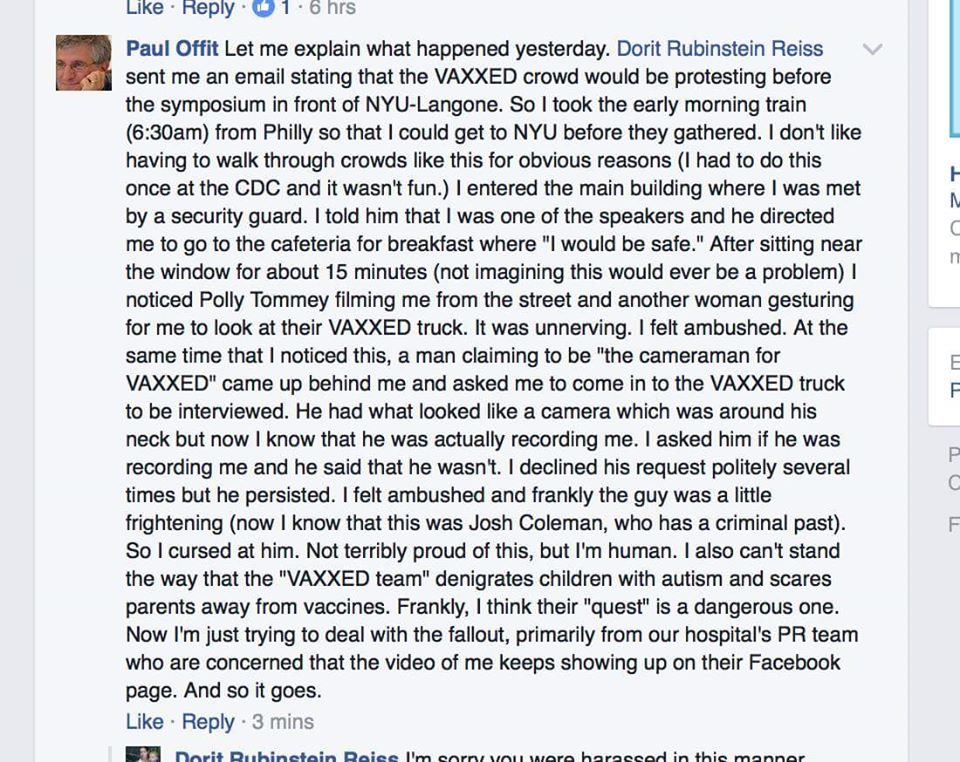 Do you suppose that the image below, featuring a smug looking and grinning Dr Profit, supports his “woe is me” narrative of victimhood and persecution at the hands of the “questing” Vaxxed team? His claim of declining “politely several times” before going all “reptilian brain” and telling Coleman to “get the fuck outta here” like a common thug does not seem overly well supported by the video footage – but you be the judge. Oh, and Coleman’s “criminal past” seems to consist of the monstrous crime of “key-ing” someone’s car and then hiding from the police (in a garbage can). Meanwhile, vaccine profiteers like Offit enjoy legal immunity and make mock of parents (like Coleman) with vaccine-injured children, distorting reality to paint the victims as the abusers in what is the standard pro-vax reality inversion tactic. There is zero justice to be seen here.

For the record, Coleman has a vaccine-injured child, like so many other American parents, and it is not clear if he did indeed key the car, or if he was perhaps scratching the car out of frustration (was the disabled car space being occupied illegitimately and perhaps not for the first time?). 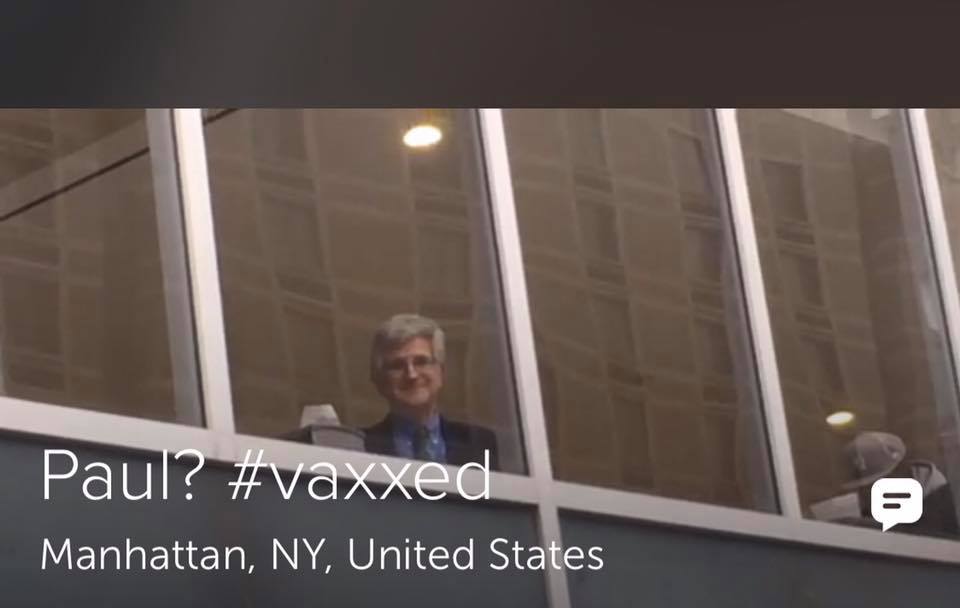 We aren’t entirely sure who took the above photo of Offit at his breakfast table where the “frightening” Coleman requested an interview, however, it seems most likely that it was a member of the Vaxxed crew (Polly Tommey). If this is the case, why doesn’t Offit look nearly as perturbed as his comments above claim?

The following video lays the truth bare for all to see, the crux of which is that Paul Offit is a pathological liar. This is the same man telling you your children could be vaccinated 100,000 times without harm.

This video is a MUST SEE. Two points of view tell the real story…

If the mountain of evidence isn’t already enough for you, consider this video, from Robert F. Kennedy, Jr in which he comes to the exact same conclusion we have.

Kennedy on Recorded Phone Call with Paul Offit from NA on Vimeo.

It was recently brought to our attention that the state of Victoria in Australia, for whom the public health sinister is the similarly mendacious Jill “No Risks” Hennessy, has apparently been using Offit’s 100,000 vaccines figure (not content with the already insane 10,000, eh, Jill?) in vaccine promotional materials. 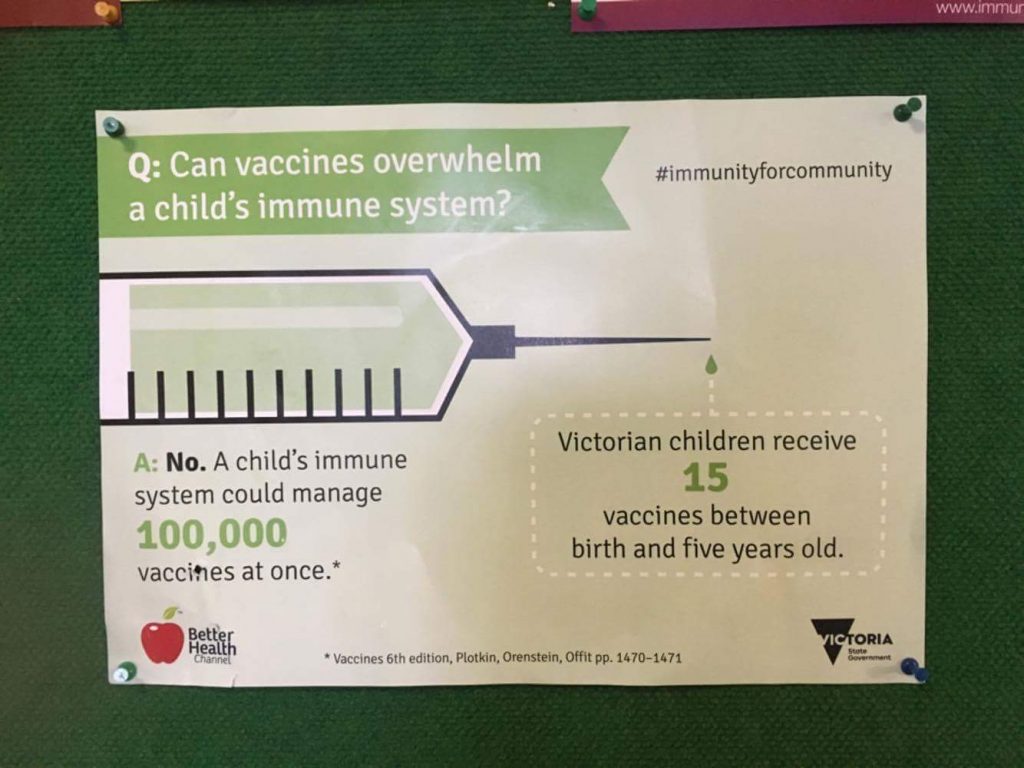 Since the documented evidence of harm and death resulting in children receiving far fewer than 10,000 vaccines is so sickeningly plentiful (made plain by the Vaxxed bus as it tours America), it is clear that at this point serious legal action against the Victorian State Government and Minister Hennessy is not merely justified, but urgently required. She has already been caught lying about “abusive Tweets” (with the Herald Sun complicit in the fraud), so nothing she says on the subject of vaccine safety can be given the slightest credence. The same goes for Offit, who, according to various observers, is a deeply dishonest and unpleasant man, and one with a very heavily vested interest in the public believing that vaccines simply cannot do any harm.

The equation is simple: as awareness of natural health and of vaccine damage rises, so does Offit’s (and Hennessy and co.’s) culpability.

Dr Profit may have sold out his financial interests in the Rotateq vaccine, but he seems to have built something of a vaccine empire unto himself and will continue to profit from book sales and no doubt other revenue raising factors.

It must be worrying for those like him to learn that the more highly educated and wealthy segments of society (at least in Australia) are the ones tending to move away from vaccination, which proves one thing clearly: the government’s recent No Jab No Pay (NJNP) measures unfairly target (extort) the financially vulnerable in a futile act of class war. It can have little impact on vaccination uptake and therefore “herd immunity,” since many parents have chosen to protect their children from potential vaccine harm and forego the government benefits in question, while more broadly, significant portions of the herd aren’t participating in the vaccine game any more.

Most adults simply do not choose to receive “booster” shots for the various conditions touted for “elimination,” so realistically speaking, it is utterly irrational to believe that the NJNP measure unfairly targeting low income families will somehow magically prevent disease outbreaks by enhancing “herd immunity”!

How can the “herd” be “protected” if the adult population isn’t keeping to the vaccine schedule? Or was it really about cutting costs and budgeting better under the guise of “protecting public health”? You know, cut spending on a few low income families and tell people it’s really about protecting the herd. How the poor and vulnerable are treated by the Australian government is unfortunately indicative. Back to Dr Profit. 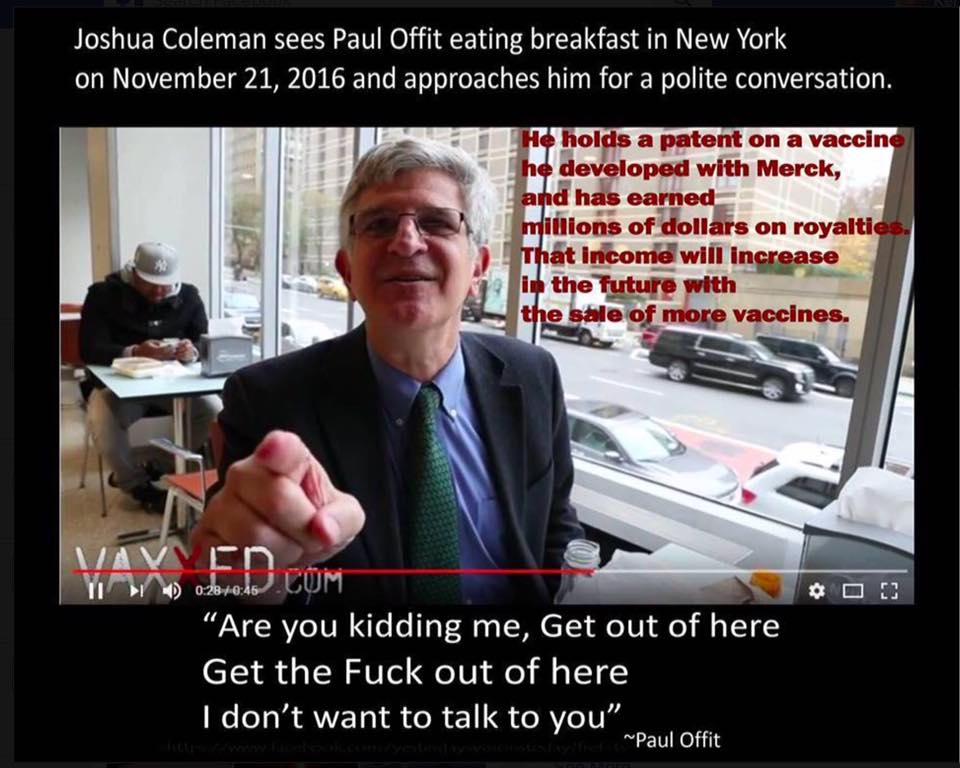 It may not surprise you that good ol’ Paul Profit has been a member of the Centers for Disease Control (CDC) Advisory Committee on Immunization Practices. One can imagine the kind of “advising” he would have been doing in that very much corrupt organization. Read more about that here in this exemplary piece of investigative work by Blaxill and Olmsted, which demonstrates that Dr Profit is positively rolling in cash resulting from his involvement in the vaccine industry, an industry which prospers on the back of the public’s blind faith and acquiescence – not to mention willingness to look the other way when evidence of harm and fraud is presented.

In addition to being on the CDC Advisory Committee on Immunization Practices, Offit is the Professor of Pediatrics at the Perelman School of Medicine at the University of Pennsylvania, Chief of the Division of Infectious Diseases, and the Director of the Vaccine Education Center at The Children’s Hospital of Philadelphia. Offit is also a Board Member of Every Child By Two and a Founding Board Member of the Autism Science Foundation (ASF). Food for thought.

More news the “Prophet” and his fawning fans won’t like us sharing:

Unfortunately for Dr. Offit (not so affectionately named Dr. Profit), a 2010 study published in Journal of Virology revealed that his multi-million dollar grossing patent on the Rotateq vaccine contains a live simian retrovirus (with a 96% match of certainty) that has likely infected millions of children over the past few years with a virus that causes great harm. Retrovirus infections are permanent, and can carry on indefinitely into future generations. In other words, once they are inserted into the human genome they can not be removed. View the entire PDF here.

Moreover, a 2014 study published in Advances in Virology found Dr. Offit’s vaccine contains a “a baboon endogenous virus strain M7…likely due to the monkey cell line in which RotaTeq was produced from.”

See here for an overview of doctors and scientists with serious criticisms of vaccines. Please forward it to those who need to know.

Additionally, here is a video featuring Dr Boyd Haley dismantling asinine claim after asinine claim made by Profit about vaccines.