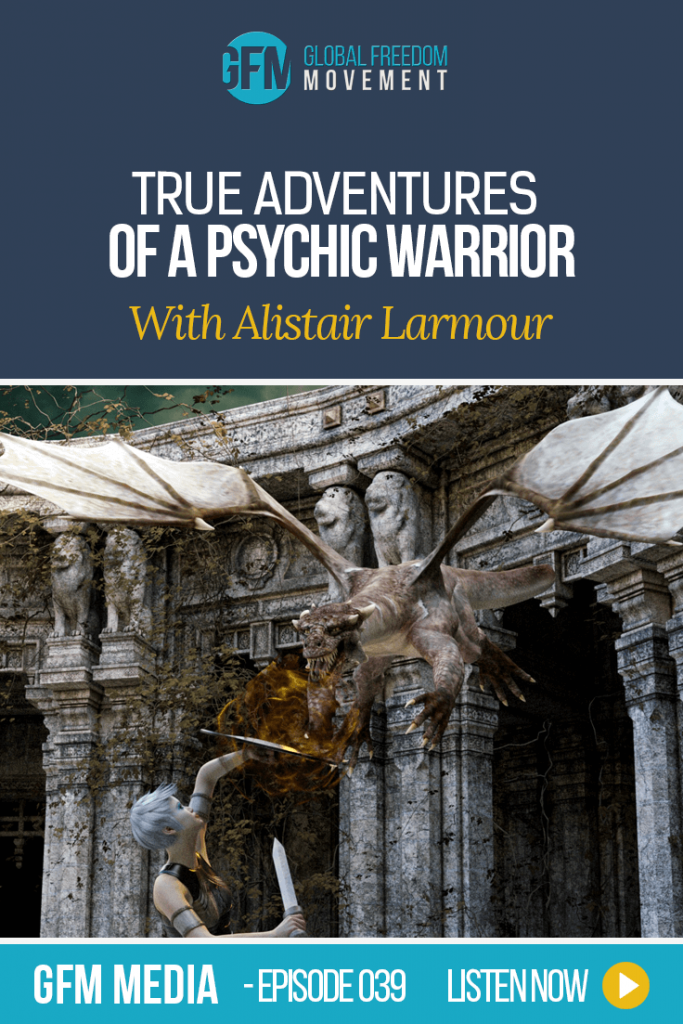 Alistair Larmour is a rare breed of warrior. His battles are waged on the psychic plane, and his first major victory was over his own personal demons. After over a decade of research and practical application – and thousands of hours of meditation later – he is one of the only individuals out there who works successfully with schizophrenics to cure the root cause of their condition – and he does it on a no cure, no pay basis.

More esoterically speaking, Alistair’s adventures on the psychic planes of beingness have yielded a great many insights into the sources of the world’s woes, and some of the interfering powers/beings that prey on our misery. Some of them include: reptilians, greys, gargoyles, demons, and more, some of whom featured prominently in our discussion with Steve Richards not long ago (see GFM Media archives).

Here’s some of Alistair’s background in his own fascinating words:

I found myself homeless at the age of 25 and after a normal upbringing, I had no explanation as to why this happened to me. I was just baffled as to why living was so hard. I found I was self-medicating with alcohol to deal with my schizophrenia.

I joined alcoholics anonymous a couple of years later and they saved me from suicidal despair and had the patience to deal with the nonsense I had used to replace my logic. It was a long struggle and they had the patience to listen and understand. I was very lucky to be a part of that organization.

I worked very, very hard at the 12 step program and completed it 3 times before I integrated it into my life. My fellow 12 steppers were impressed enough to give me the position of secretary of the state board of AA. I was very glad to be of service there and was able to help a lot of people and the organization as a whole.

It was a tough battle, it took me 3 years to get my marbles back. I had to rewire my brain from one that barked at traffic to one that could hold down a job, a house and a girlfriend. I did all this and found that I was still miserable. The 12 step program was not a cure, but a means of alleviating a condition that no-one could name.

I didn’t want to live like this. The inside of my head was still nasty. I was still suffering from insomnia and depression just like most of the other 12 steppers. This program wasn’t good enough and no-one else seemed to have anything better. So I tried something different. I went out and started studying alternative therapies. I have now studied 10 formally and a lot more informally. I have made some very interesting discoveries.

I actually had to treat myself into normality. I had to do hundreds and thousands of hours of treatment on myself to find out what worked and what didn’t. I was my first guinea pig. I found the core of the problem. I then knew how everyone else felt all the time.

I found that schizophrenia and alcohol/drug use both have the same root cause! It is something that nobody else is talking about. I have done exhaustive experimentation and treatments to discover…

Tune in at 9 pm Sydney time to learn just what Alistair has found – you will thank us!

Book a consultation with Alistair

Thank you for listening to True Adventures Of A Psychic Warrior With Alistair Larmour .