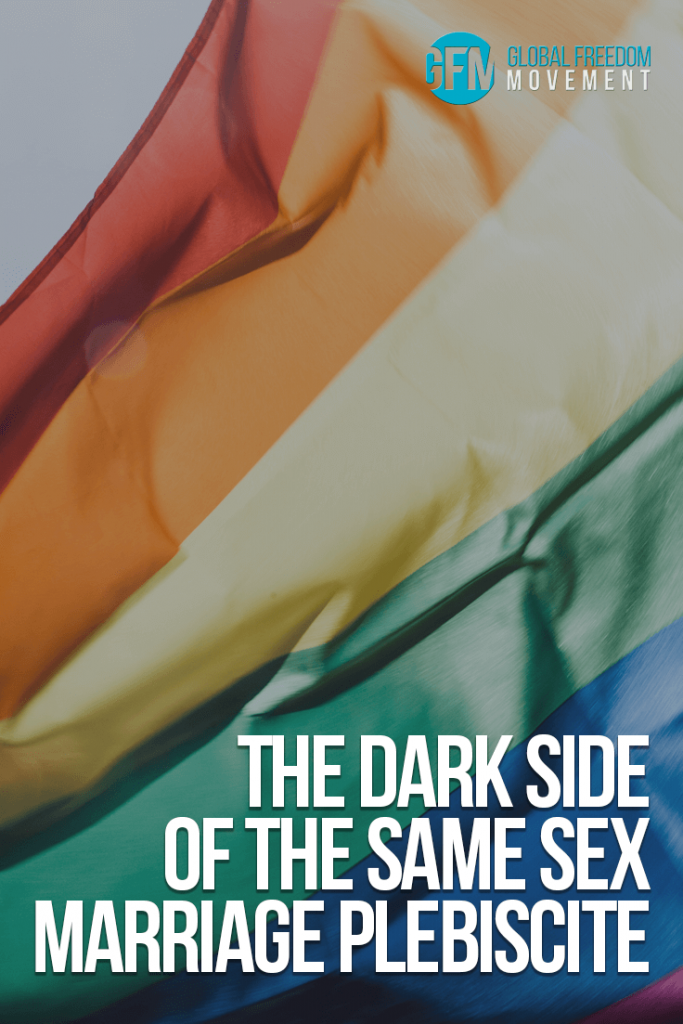 Is the same sex marriage survey what it’s cracked up to be?

Australia, if the postal survey is supposedly about “marriage equality” for “same sex marriage” (gay marriage – which most of us are fine with and couldn’t care less about), why are they planning to LEGISLATE for ALL of the dozens of invented “gender fluid” categories? Where is this all leading?

We need to talk about the dark side of the same sex marriage plebiscite and proposed changes to the Marriage Act. There are ramifications here that few have considered.

The ABS postal survey is different to the proposed amendments to the Marriage Act – VERY different. (Oh, and by the way, the Liberal government is spending $100 million+ on the postal survey – your tax dollars well spent, no?)

ABS question: “Should the law be changed to allow same-sex couples to marry?”

“Swill” Shorten wants marriage to be a union between ANY two people – no matter how gender-ambiguous they may be. That’s just one element they’re leaving out of this whole SSM discussion. We hear “same sex marriage” and think, “Gay marriage, okay, no worries,” but the changes to the act will be sweeping changes to include any two people with a pulse getting legally married. Now, while I don’t really care who is out there getting legally married (I don’t believe in legal marriage as it invites the government into a legal relationship with you and your partner in “holy wedded matrimony”), and I make no judgments on individuals for being who they are,* there is MORE going on here than meets the eye. 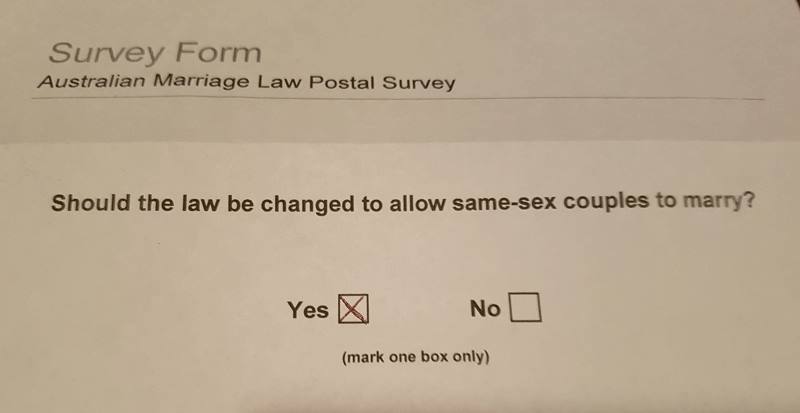 Consider the following observations of one astute observer from Facebook (whose name we will withhold) regarding who we are to legislate sweeping societal changes for:

The most recent Australian census data shows that there are 46,700 same sex couples in Australia across all states and territories. (Census 2016)

Which means 99.62% of couples are heterosexual (married/defacto)

If we redefine marriage for 0.38% of couples in Australia the Attorney-General’s Department has advised that there would be approximately 60 consequential changes across 25 Commonwealth Acts. That’s before we even understand how change would impact state and territory law, particularly as the Marriage Act interacts with anti-discrimination, charity and inheritance law. [Federal Minister; Andrew Hastie member for Canning, September 2017]

Marriage will change for everyone, not just 0.38% of the population.

It is not rewriting one line or paragraph of text, it is reconstructing marriage upon a brand new meaning and premise. All laws pertaining to other rights will be written based on this new definition. This will flow onto family law, education, religious institutions – actually any legislation that makes any heteronormative gender reference and will be replaced and rewritten genderless.

The biggest victim is heteronormative language and laws, decimating gender and gender rights. 5 bills in 5 years have been introduced in Canada, these bills are based on same sex legislation.

Bill 28 removed the words “mother” and “father” from Ontario law, while allowing people to become parents through “pre-conception parentage agreements” with up to four unrelated and unmarried adults. Bill 89 had now passed and among other things integrates gender identity and expression into child and youth services law.

These laws can be worded in such a way that seem so ambiguous and until enforced they simply seem inclusive.

But once children are being removed from loving parents, when schools have rights over the parents, when mother and father become hate speech… there is a problem.

Recently Britain’s High Court, ruled that a Christian couple were ineligible parents. While the court recognised their successful and loving record of adoption, they decreed that above all else: ‘The equality provisions concerning sexual orientation should take precedence’.

Based on what is occurring in other western commonwealth nations we have every right to be concerned.

Many people say yes because they truly see love and equality as the key to an inclusive society.

But those voting yes are rarely informed of the long term consequences in law. (Emphasis added)

Beyond the issues described above, this palaver about SSM appears to be a backdoor way of bringing not only the concept of “gender fluidity” back INTO our children’s classrooms (partly as part of the covert population control program), following the rejection of Safe Schools (S.S)., but perhaps to ultimately get the twisted Safe Schools sexual content BACK into the classroom to resume the sexualisation and grooming of children as future pedophile victims. Obviously most gay and trans people advocating for same sex marriage would be unaware of and disgusted by this, but it is highly likely to be part of the hidden agenda pushed by pedophile networks. Australian political commentator Peter Priest has stated that this is a transnational UN agenda. 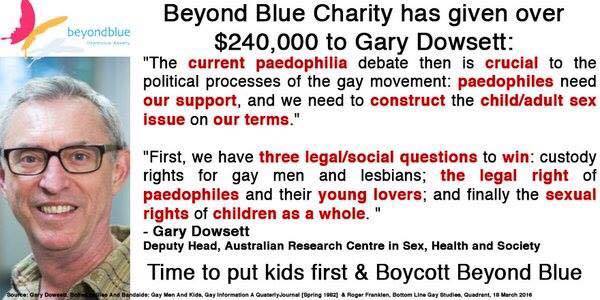 Parents throughout Victoria have been utterly gobsmacked and horrified by the overtly explicit sexual content of that Safe Schools curriculum, as reported by their (perturbed) children upon returning home from a day’s “learning” at a state-controlled public school. Little do they know of the role of paedophiles in bringing Safe Schools to classrooms.

Gary Dowsett the Deputy Director of the Australian Research Centre in Sex, Health and Society (ARCSHS), helped launch the controversial ‘Safe Schools Coalition’ through Gay and Lesbian Health Victoria in 2010. What you didn’t hear was that in the spring of 1982, he authored a paper in Gay Information openly advocating for paedophilia and paedophile “rights,” but more than that, he explicitly stated that the paedophilia “debate” is “crucial to the political processes of the gay movement: paedophiles need our support, and we need to construct the child/adult sex issue on our terms.”

That is to say that, over 30 years ago, the gay rights movement was already being hijacked and coopted by paedophile sympathizers for their own sick ends. The LGBT community should be nothing less than outraged and irate at this usurpation.

“There is research to show that, as well as feeling a sense of power and control in sexual encounters with adults, children can frequently experience sexual pleasure…It is imperative that children’s sexual desires and sense of power and pleasure not only be recognised but also normalised.” (Emphasis added)

When Angelides’ reprehensible comments were brought to wider attention, La Trobe University not only failed to sanction or fire Angelides, they had the gall to actually defend him.

Roz Ward, another Safe Schools advocate and known Marxist (also of La Trobe University!), explains what S.S. is and is not about:

“Safe Schools Coalition is about supporting gender and sexual diversity…It’s not about stopping bullying. It’s about gender and sexual diversity, it’s about same-sex-attracted, about being trans-gender, about being lesbian…” (Again, to be clear, I am NOT against LGBT people, I am simply pointing out that a leading advocate of Safe Schools [and a Marxist] is telling us it is NOT about preventing bullying. It’s about social engineering.)

The Australian reported in mid-2016:

Daniel Andrews’s government has funded another program in schools that encourages adults to sexualise children and expose them to sexually explicit materials…[T]he program is presented as an exercise in diversity and inclusion.

[T]he BRR program acculturates children to sexualise themselves and their peers, presenting adolescent sexuality as the norm. Children are asked to answer: “Who do you think has responsibility for making decisions about sex and romance in your relationships?” In another, child sexual activity is assumed: “How do you work out and negotiate having sexual contact within your relationship or in your life?” (www.theaustralian.com.au) 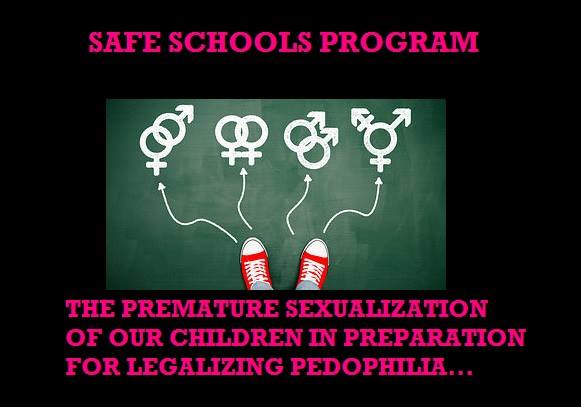 (Isn’t it time to remove Andrews from the arena of politics altogether, ladies and gentlemen, and put him to better use as, say, a door stop or something else he’s equally qualified for?)

Are you ready for this? Some lessons are known to

create a dissociative response that is common to victims of child sex abuse. In a lesson supposed to provide “different perspectives on sexual intimacy”, children are used in a role-playing exercise so psychologically harmful they may need to “de-role” afterwards. In one of the lessons, teachers are warned that as a result of program content, students may have “slipped into a state of distress or disassociation”. Teachers are instructed to “de-role” children by asking them to state their names and where they are. (www.theaustralian.com.au) [Emphasis added]

Once this gender fluidity bonanza (dozens and dozens of “fluid” categories) is legislated, then Safe Schools material (under another name) would likely be brought back into the classroom, as it’s “just the law.” Teaching the “truths” of the altered Marriage Act and other genderless legislation would be seen as “valid” and innocuous then, because it wouldn’t be law if it was morally repugnant…right? What is happening here is that, under the banner of “tolerance and inclusivity” for decent LGBT people, paedophilic perversions are being slipped into the school curriculum among some of the more valid elements. This is not happenstance. This is how the paedophile networks seek to groom children, destroy their identities, and thus, destroy their sense of boundaries and blur the lines between what may or may not be an appropriate interaction with an adult.

When I see the sad results of decades of biochemical and psychological warfare on the populace being normalised, legalised, and even lauded and mandated, I think concern is justified. Frankly, there’s never been a better time to remove your children from state schools.

Let’s now take a look around the world where other “progressive” nations have already blazed the path Australia now considers.

The ramifications of this kind of legislation have not yet sunk into public awareness in general. They are, however, chilling.

As we have seen from Canada, the UK, the United States and New Zealand, same-sex marriage was just a stepping stone toward a much larger, a much wider sex/gender revolution with the agenda to completely re-engineer reality as we know it. Here are some chilling examples:

If you say or write anything considered “homophobic” (including, by definition, anything questioning same-sex marriage), you could face discipline, termination of employment, or prosecution by the government.
Transgenders represent approximately 0.3% of Canadians, yet the government has mandated the use of pronouns (such as che/zhe/chir/zir) for transgenders and failure to address transgenders with their preferred pronouns will result in fines.
Teachers in Ontario have been told to keep child’s transgenderism from parents.
The state can seize your child if you you refuse to raise him/her according to the gender that they identify as.
Canada introduces ‘X’ as third gender option on passports hailed as an “important step towards advancing equality for all Canadians regardless of gender identity or expression.”

In the wake of the legalisation of same-sex marriage, Obama admin forced transgender bathrooms, locker rooms, on schools as condition of funding.
California will fine you for refusing to use the correct gender pronoun for transgenders.
Christians are being fined tens of thousands of dollars for politely declining to offer their services to cater for a same-sex wedding.
United States case study finds redefining marriage redefines parenting.

Justine Greening, the UK minister for women and equality, called the move to give more rights to transgender people the THIRD GREAT “STEP FORWARD” after equality for women and the legalisation of same-sex marriage in 2013.
Orthodox Jewish girls school faces closure for refusing to teach children about homosexuality.
Sex change referrals in the UK skyrocketed from 96 in 2009/10 to a staggering 2,016 in 2016/17. [You better get familiar with the concept of social engineering.]

Things are never quite as they seem with the West’s special brand of excessively self-serving and corrupt politicians. One thing is clear: they don’t care about you  and they don’t work for you – they serve another master.

The only sensible “vote” (if you plan to vote) would appear to be a resounding “no,” not this time around anyway.

*I’m SO over feeling the need to add the constant disclaimer amounting to “but I’m not bigoted against anyone” just so someone doesn’t get “offended” or feel “oppressed.”