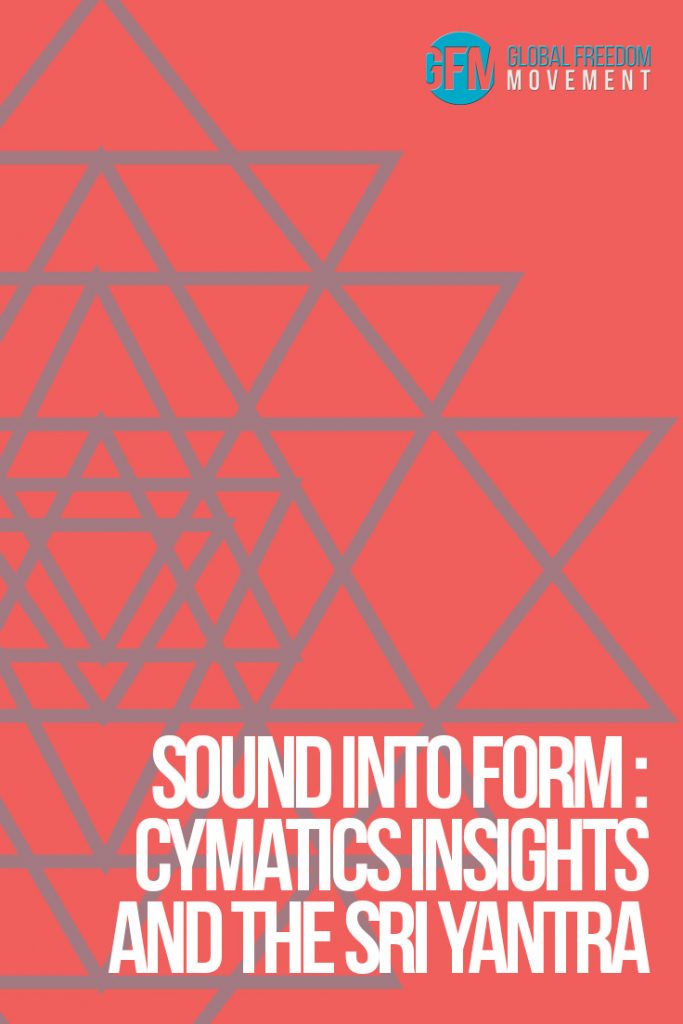 It was Ernst Chladni (1756–1827), a German jurist, physicist, and musician now known as the Father of Acoustics, who had developed the precursor to Cymatics (to kyma, the wave; ta kymatika, matters pertaining to waves, wave matters.) in the early 1800s. Chladni repeated the pioneering experiments of Robert Hooke of Oxford University who, on July 8, 1680, had observed the nodal patterns associated with the vibrations of glass plates. Hooke ran a violin bow along the edge of a plate covered with flour, and saw the nodal patterns emerge.[i]

In a demonstration to Napoleon in 1809, Chladni placed sand in a plate fixed to a pedestal and drew a violin bow around the plate, causing the sand to shift into intricate designs, effectively making sound waves visible. In the 1900s Hans Jenny, building on Chladni’s work, studied and documented the effects of sound vibrations on fluids, powders, and liquid paste. He would place these substances on a steel plate and then vibrate the plate at different frequencies, observing that a given vibrational frequency would organize the substance(s) into particular patterns. Jenny also developed the tonoscope for observing the action of the human voice on various materials in various media. This is a simple apparatus into which the experimenter can speak without any intermediate electroacoustic unit. Thus, vibrations are imparted to a diaphragm on which sand, powder, or a liquid are placed as indicators. Speaking actually produces on this diaphragm figures that correspond, as it were, to the sound spectrum of a vowel. The pattern is characteristic not only of the sound but also the pitch of the speech or song. The indicator material and also the nature of the diaphragm are, of course, also determinative factors.[ii]

When “Om,” the Hindu primordial sound of creation, is intoned into a tonoscope it forms in the substance the Sri Yantra, the visual representation of the Om chant and the vibration behind the cosmos itself[iii], the “sound” of the aetheric medium or “fabric” of space. Tellingly, it displays a self-similar/fractal interlaced tetrahedra-within-concentric-circles motif. (Technically, a tetrahedron isn’t fractal in itself because fractality is defined by the phi/Golden Ratio, and the tetrahedron is not based on phi, as Dan Winter emphatically instructs.) Thus we see that the Hindus knew thousands of years ago that sound possessed geometry, or sound into form is a fundamental truth of reality. The Om chant itself is one for expanding consciousness by developing resonance with the cosmos. (Remember, too, that sound waves exist in three dimensions!)

In Jenny’s Cymatics, we find images of his work demonstrating the increase in geometrical complexity in matter that occurs with an increase in vibration: what starts out as a relatively simple and spare pattern will grow in detail and complexity as the pitch increases—while still retaining the same basic theme. This makes some sense in that the higher a frequency rises, the more informational complexity it can code for, and the more complex the data, form, or geometry becomes. Frequency determines form. As vibrational frequencies shift, they move through harmonic gradations within the aether. These gradations work, as noted, as do the harmonics of music; they are octave-based. Donald Andrews found through his research that identical shapes in the size ratio of 2:1 produced the same fundamental tone but an octave apart.[iv]

Jenny’s images have a sort of fractal self-similarity to them. The form retains its signature shapes but repeats them at smaller sizes, creating a more complex and intricate structure as frequency increases. Jenny’s images demonstrate repeatedly how the frequency relates to the complexity of a pattern or object. The higher frequencies seemingly encode more information, the lower frequencies less; thus, higher frequencies manifest more complex, sophisticated geometry. The figures of Jenny’s that crudely resemble humans are one example, a microcosm of the larger human form. Our more complex form requires a sophisticated vibrational matrix, provided by the nested subtle energy bodies (etheric, astral, mental, etc.) and chakras that comprise our overall field. The stick figures were highly simple, undetailed shapes resulting from a single vibrational frequency on a flat (2D) surface. We humans exist as a 3D cross-section of higher-dimensional informational fields/templates, a much more intricate and complex set of vibrational frequencies interfering with each other. Thus we have an infinitely more complex physiology than our stick figure brethren born of the 2D plane and single vibrational frequency.

We are reminded that the solidity of matter is merely a convincing illusion, arising from a matrix of standing wave frequencies which arranges the ‘bubbles’ within the aether or ‘koilon’ into intelligently encoded form. Contemporary sciences are increasingly verifying the ancient cosmogonic vision of a vibratory creation through the Creative Word or Cosmic Sound. Alain Daniélou elaborates on this vision:

From the atoms up to the universe, each of the cosmic movements possesses a tempo, a rhythm, a periodicity and can be compared then to vibration, therefore to a sound which expresses its nature…[T]he relationships between the vibrations can be compared to the relations of audible frequencies. All atoms can thus be considered as the forms of an energy which expresses itself in a rhythm, and all substances are characterized by a particular relationship of rhythms which can be represented by a relationship of sounds.[v]

Other of Jenny’s experiments with the tonoscope yielded mini-landscapes with mountainous terrain, etc., all in a constant state of flux, shifting and morphing yet retaining the basic shapes and structures. He also obtained spheres out of particulate matter that was vibrated on the plate, the largest being the size of a pigeon’s egg.[vi] Sounds affected gas suspended in the air by causing a lattice-like pattern at one frequency and a stratified laminar structure at other frequencies.[vii]

Overall we can see that energy frequency and wave phase information dictates the physical geometry that results. Jenny’s work illustrates that matter really is created and maintained by standing waves that are caused in turn by a particular vibrational frequency or conglomeration of harmonic frequencies. His work indicates that standing wave fields can create moving/morphing objects, something that seemingly challenges the usual concepts of matter; and yet this offers a rudimentary insight into how the vibrational energy fields of the human body can conduct the seemingly infinite cellular chemical processes in harmony in a way that the orthodox understanding of human chemistry cannot offer. The vibrational fields code for the constant renewal and regeneration of the basic ‘building blocks’ of the body, while coding for the other growth and maintenance procedures as well. There is simply not enough instructional material in DNA to run this incredibly complicated biological symphony, as we show in The Grand Illusion (TGI).

Jenny’s work provides a vivid symbolic representation of the mystic’s conception and understanding of creation; the way that, from the still, formless infinite consciousness that underlies all reality (which we are calling the aether), vibrational frequencies—sound, or ‘the Word,’ for Bible fans out there—and then physical form can be derived. When the vibration is removed, the physical forms (duality) disappear and all is one again; the illusion of creation, of form and multiplicity subsides “as a cloud melts away in the empyrean.” In pages to come (of TGI) we will see that energy fields that are invisible to most humans’ perceptions do in fact pre-empt and guide the physical and chemical formation of all living things.

Excerpted from The Grand Illusion – Book 1 by Brendan D. Murphy 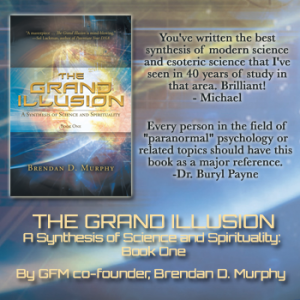 What readers are saying:

Brendan is the Chomsky of the Spiritual movement.
Alistair Larmour, medical intuitive

The whole book was amazing and I am insisting that all of the trainers who teach my model read it as well as putting it on the Must Read list for my classes and telling them about it verbally. It is important. Thank you for this masterpiece. The world needs it.
Lisa Schwartz

I believe that your writing is even more important than your admirers realize because it can help to awaken the influential leaders who already know that we must begin immediately to build a new paradigm. That cannot happen without a revised understanding about the true nature of consciousness. I know of no one who is grappling with the problem at your level. I will be sharing your writing with others.
John Holum

[T]his is a really good piece of work, my friend! Good research, well thought out, impeccably reported, a real contribution to the field…Rock on!
Dave Yurth, scientist, inventor, author

A masterpiece…The Grand Illusion is mind-blowing.
Sol Luckman, author of Potentiate Your DNA

[vii] Jenny, 97. Jenny makes an interesting point on an apparent anti-gravity effect: While the tone impulse persists, liquids and viscous masses will remain in their place if the diaphragm is tilted, or even held vertically. If the vibration is discontinued, the masses slip down under the force of gravity. If the resumption of the tone is not delayed too long, the masses return to their position, i.e. they climb up again. See Cymatics, 27-8.