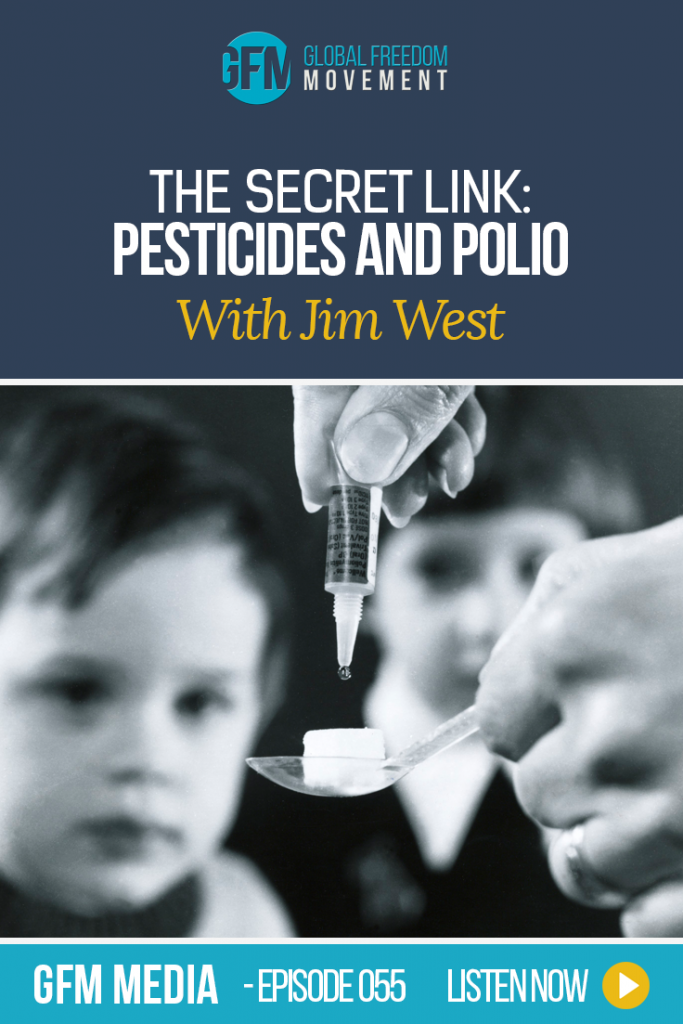 Two weeks ago we spoke to independent researcher Jim West and shared his extremely disturbing – though vitally important – revelations concerning the little-known and very real dangers of prenatal ultrasound. This week Jim’s back on GFM Media to reveal the little-known links between polio and DDT and knock the living snot out of the mainstream medical mythology around polio. 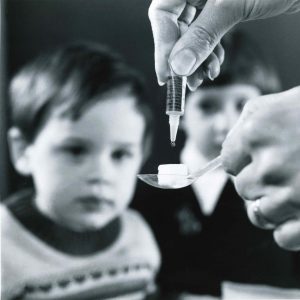 “Poliomyelitis is unique in that it is the only disease in the history of medicine in which a theory, and not an established fact as to its cause, has become incorporated into the public health law.”

“…when this disease was legally made a communicable disease… funds for poliomyelitis research were from then on designated for the investigation of the infectious theory only.”

“In 1907, [during] an epidemic of poliomyelitis… no infant who was fed exclusively on the breast developed poliomyelitis.”

“Medical studies have shown repeatedly that paralytic diseases in… [domestic animals] occur simultaneously in districts where epidemics of poliomyelitis are prevalent.”

“Poliomyelitis investigations… have been confined exclusively to virus studies.”

“There is much evidence to indicate that the poliomyelitis virus is synthesized or activated within the human body instead of entering it as commonly assumed.”

“Carrel (1925) was able to produce tumors resembling [exactly] Rous’ sarcoma and transmissible by cell-free [Berkefeld] filtrates with indol, arsenic, or tar in chicken embryo. Carrel’s observations have been confirmed by other workers. Fischer (1926), by treating cultures of normal cells with arsenic obtained on one occasion a filtrable virus capable of causing tumors.”

Join us at 9 pm Sydney time (remember daylight savings has just started in Sydney) tonight for some factual ammo you can use to educate the vaccine zealots trying to ram mandatory vaccines down our throats! 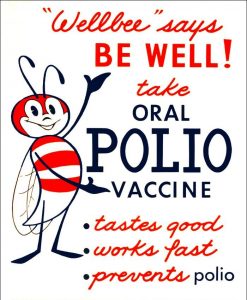 The Perth Group – formed in 1981 in Perth, Western Australia. The three original members are the leader, biophysicist Eleni Papadopulos-Eleopulos, emergency physician Valendar F Turner and Professor of Pathology John Papadimitriou. Over the years several other scientists have contributed to or joined the Group. These are physicists Bruce Hedland-Thomas, David Causer and Barry Page, Florida USA biochemist Todd Miller and Colombian physician/medical researcher Helman Alfonso. The Perth Group has published scientific papers and letters in peer reviewed medical journals as well as in the popular press. Two of the group are invited members of the Presidential AIDS Advisory Panel and have presented our material in various forums including the Presidential Panel and via satellite at the Geneva International AIDS Conference.

The view of The Perth Group is that the HIV/AIDS experts have not proven:

1. The existence of a unique, exogenously acquired retrovirus, HIV.
2. The “HIV” antibody tests are specific for “HIV” infection.
3. The HIV theory of AIDS, that is, that HIV causes acquired immune deficiency (destruction of T4 lymphocytes=AID) or that AID leads to the development of the clinical syndrome AIDS.
4. The “HIV genome”, (RNA or DNA) originates in a unique, exogenously acquired infectious retroviral particle.
5. HIV/AIDS is infectious, either by blood, blood products or sexual intercourse.
6. Mother to child transmission of a retrovirus HIV or its inhibition with AZT or nevirapine.

The Perth Group has argued:

1. The impossibility of haemophiliacs acquiring HIV following factor VIII infusions.
2. That AIDS and all the phenomena inferred as “HIV” are induced by changes in cellular redox brought about by the oxidative nature of substances and exposures common to all the AIDS risk groups and to the cells used in the “culture” and “isolation” of “HIV”.
3. That AIDS will not spread outside the original risk groups.
4. That the cessation of exposure to oxidants and/or use of anti-oxidants will improve the outcome of AIDS patients.
5. That the pharmacological data prove AZT cannot kill “HIV” and AZT is toxic to all cells and may cause some cases of AIDS.

Polio Incidence and DDT Production – graph compiled by Jim West and featured in the book and also in the interview. 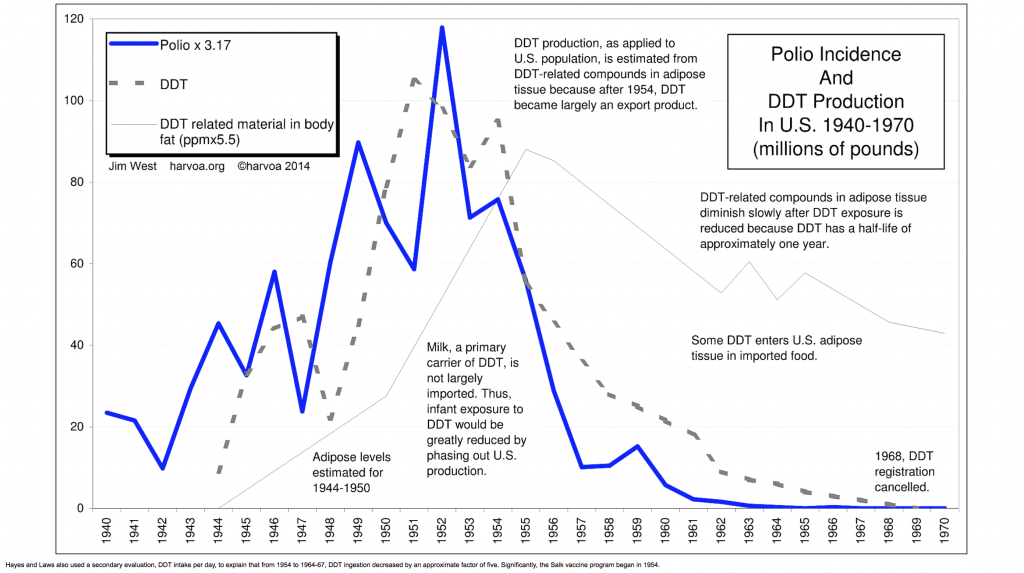 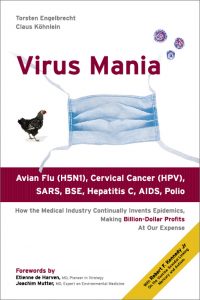 Virus Mania: How the Medical Industry Continually Invents Epidemics, Making Billion-Dollar Profits at Our Expense book by Torsten Engelbrecht and Claus Köhnlein – A daily scan through the newspapers and TV news gives the impression that the entire world is constantly invaded by new and horrible virus epidemics. The latest headlines feature the human papillomavirus (HPV) alleged to cause cervical cancer and the avian flu virus, H5N1. The public is also continually terrorized by reports about SARS, BSE, Hepatitis C, AIDS, Ebola, and Polio. However, this virus mayhem ignores very basic scientific facts: the existence, the pathogenicity and the deadly effects of these agents have never been proven. The medical establishment and its loyal media acolytes claim that this evidence has been produced. But these claims are highly suspect because modern medicine has pushed direct virus proof methods aside and uses dubious indirect tools to “prove” the existence of viruses such as antibody tests and the polymerase chain reaction (PCR).

The authors of Virus Mania, journalist Torsten Engelbrecht and doctor of internal medicine Claus Köhnlein, show that these alleged contagious viruses are, in fact, particles produced by the cells themselves as a consequence of certain stress factors such as drugs. These particles are then identified by antibody and PCR tests and interpreted as epidemic-causing viruses by doctors who have been inoculated for over 100 years by the theory that microbes are deadly and only modern medications and vaccines will protect us from virus pandemics.

The central aim of this book is to steer the discussion back to a real scientific debate and put medicine back on the path of an impartial analysis of the facts. It will put medical experiments, clinical trials, statistics and government policies under the microscope, revealing that the people charged with protecting our health and safety have deviated from this path. Along the way, Engelbrecht and Köhnlein will analyze all possible causes of illness such as pharmaceuticals, lifestyle drugs, pesticides, heavy metals, pollution, stress and processed (and sometimes genetically modified) foods. All of these can heavily damage the body of humans and animals and even kill them. And precisely these factors typically prevail where the victims of alleged viruses live and work. To substantiate these claims, the authors cite dozens of highly renowned scientists, among them the Nobel laureates Kary Mullis, Barbara McClintock, Walter Gilbert, Sir Frank Macfarlane Burnet and microbiologist and Pulitzer Prize winner René Dubos. The book presents approximately 1,100 pertinent scientific references, the majority of which have been published recently.

The topic of this book is of pivotal significance. The pharmaceutical companies and top scientists rake in enormous sums of money by attacking germs and the media boosts its audience ratings and circulations with sensationalized reporting (the coverage of the New York Times and Der Spiegel are specifically analyzed). Individuals pay the highest price of all, without getting what they deserve and need most to maintain health: enlightenment about the real causes and true necessities for prevention and cure of their illnesses. “The first step is to give up the illusion that the primary purpose of modern medical research is to improve people’s health most effectively and efficiently,” advises John Abramson of Harvard Medical School. “The primary purpose of commercially-funded clinical research is to maximize financial return on investment, not health.”

Virus Mania will inform you on how such an environment took root—and how to empower yourself for a healthy life.

Torsten Engelbrecht works as a freelance journalist in Hamburg. He has written articles for publications such as Medical Hypotheses, British Medical Journal (online), Süddeutsche Zeitung, Neue Zürcher Zeitung, and The Ecologist. From 2000 to 2004, he worked as business editor of the Financial Times Deutschland.

Claus Köhnlein is a medical specialist of internal diseases. He completed his residency in the Oncology Department at the University of Kiel. Since 1993, he has worked in his own medical practice, treating Hepatitis C and AIDS patients who are skeptical of antiviral medications. 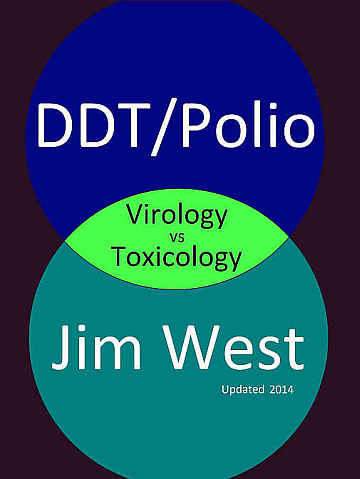 DDT/  Polio Virology vs Toxicology  – The DDT/Polio thesis represents the major historical turning point for political criticism of the sciences of environment, epidemiology, and germ theory. It was brought to the public by the independent research of Jim West, first published in The Townsend Letter for Doctors and Patients, June 2000. With three original articles published circa 2000, and with current (2014) updates, annotations and commentary, the author unearths a disconnected, buried science of polio, i.e., the 1950s arcana of Biskind, Mobbs and Scobey.

With modern epidemiological graphs, with toxicological and virological insights, the thesis describes a human disaster resulting from the massive application of persistent pesticides circa 1945-1972. The oft-maligned Rachel Carson is effectively and simply defended. The author introduces strong arguments that enable a clear separation of science from politics within the areas of toxicology, virology and environmentalism, and the related topics, vaccination and immunology. 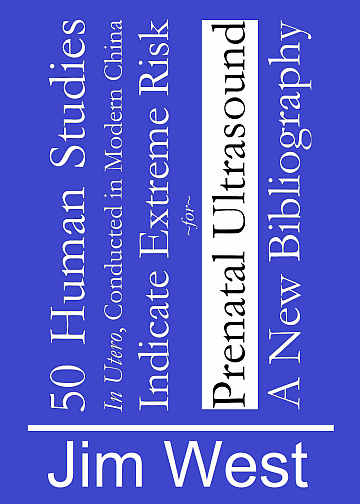 This bibliography includes over 50 studies of in utero fetal exposure, conducted in the modern era. These provide empirical evidence of ultrasound hazards to humans. The analytic techniques are sophisticated, far exceeding Western studies.

Presently, both the mainstream and the critics believe there are few modern ultrasound studies.

Decades ago, Western scientists had already found ultrasound hazards by way of animal studies, however, they claimed they were unable to confirm these with human studies, and unable to conduct human studies due to abortion and human rights ethics. Human studies were virtually banned in the Western realm. The medical industry was not reporting any human damage, and thus, it was assumed that humans were resistant to ultrasound toxicity.

These studies were previously unknown to the Western realm and little known even in the East. These represent a limited period of new, optimistic research, circa 1988 to 2011. These were pushed aside by a tremendous continual flood of studies that promote ultrasound medical and therapeutic innovations.

Because of cultural and language gaps, and an apparent lack of interest by industry to promote these studies, these studies have sat dormant, not discussed outside of China.

The studies reside in Chinese online databases in Chinese language. Some of these were roughly and partially translated by machine software. Many are not available through search engines, except directly through the Chinese databases.

Their conclusions are stunning, with recommendations that ultrasound sessions should be completely avoided “for a quality pregnancy”. Only if there are specific medical indications should ultrasound be recommended, and at minimum intensity settings. A session should last no more than 3 minutes, 5 minutes at most. Multiple sessions should be avoided.

These guidelines reflect and confirm the U.S. National Institute of Health “Consensus Statement”, published in 1984.

Thank you for listening to Pesticides and Polio: The Secret Link With Jim West.