This article was published on Wake Up World on June 12, 2015 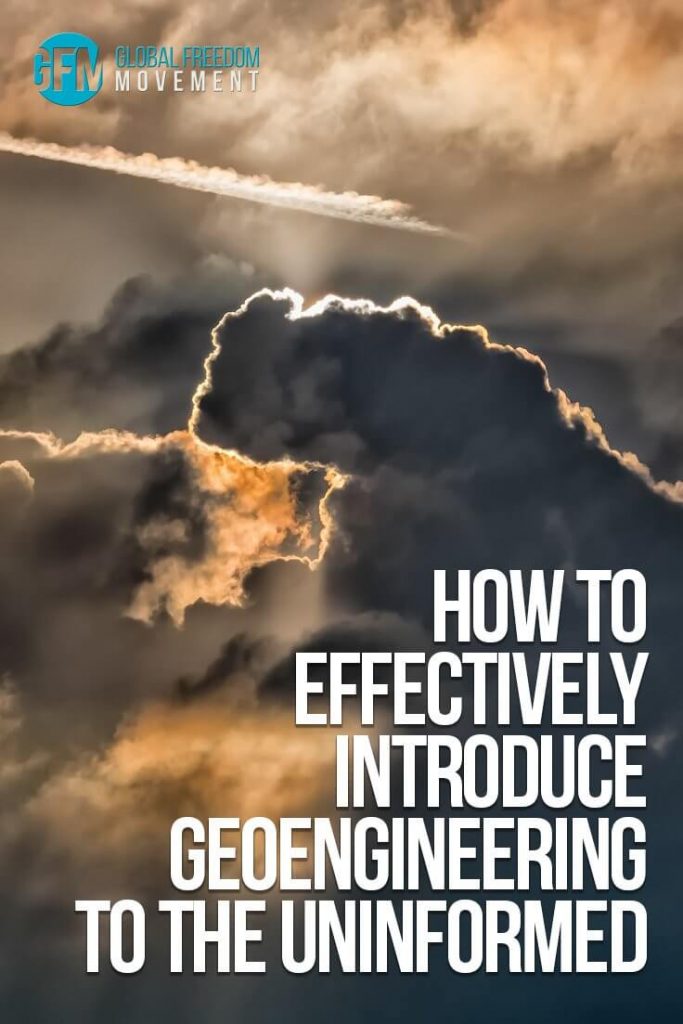 “Geoengineering”. It sounds like science fiction, but it’s not. It’s happening right above you.

You can easily find articles and debates in which scientists propose to “dim” the sun to slow down climate change, using a technique called “Solar Radiation Management” (SRM). Their concept is to mimic the dimming and cooling effects of a volcanic eruption and existing particulate pollution made by human activity. However, it has been out of the ‘proposal’ stage for quite some time, and even though government officials will not admit it, SRM is already in full-scale operation.

To some, SRM may sound like a viable solution to slowing climate warming, and scientists have repeated how “cheap” it is over and over again. But it comes with a price. In fact, it comes with many…

A primary stated goal of the geoengineering programs is to provide a “solar shield” to slow “runaway climate change” by spraying tens of millions of tons of highly toxic metal nano particulates (a nanometer is 1/1,000,000,000 of a meter) into the atmosphere. As a result, these global climate geoengineering programs are radically disrupting natural weather patterns [1], disrupting the hydrological cycle [2] (causing drought in some areas and flooding others)[3], destroying the ozone layer [4], and contaminating the entire planet [5] with the toxic fallout from these atmospheric spraying operations [6].

Climate engineering programs have been fully deployed for many years. There is a mountain of hard science data [7] and film footage [8] to back up these statements of fact.

So how do we stop the spraying?

Introducing Geoengineering to the Uninformed

1. You must get off the bench and show up for the cause

The largest climate change awareness march ever occurred in New York on September 21, 2014. By some estimates as many as 400,000 participated. Unfortunately, not a single anti-geoengineering activist made it to this march in order to help wake up the climate change activists to the climate engineering reality.

Cheering from the sidelines won’t get the job done, we all have to get into the trench and help in the fight. Every day each of us can find some way to move the ball forward in regard to raising awareness. Who haven’t you spoken to about this issue? Who haven’t you passed on a flyer or DVD to? When is the next ‘Stop Climate Engineering’ march? Will you be there?

Below: Images from chemtrails protest in Bolona, Italy, April 2015 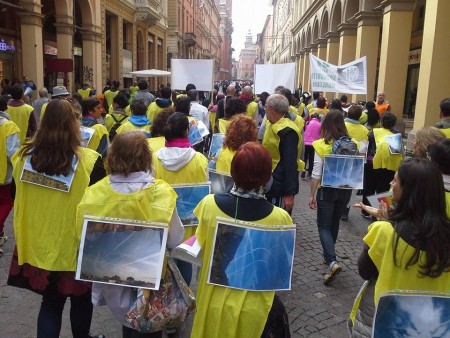 2. Spend Some Time Getting at Least Somewhat “Up to Speed” On the Issue Yourself

It is important to be able to field at least some basic questions about this most dire issue if you are to gain credibility with others. Most people, of any political stripe, do not want to be sprayed like bugs. Most people are at least partially aware that the weather is “off”, that chronic respiratory diseases and countless other related diseases are going off the charts. Most are also aware that weather modification (at least in some form) is real.

A conversation can often be initiated by simply asking someone if they have noticed the weather is unusual or changing? Are they aware of the fact that there are massive global weather modification programs that are not being reported by media?

Again, know the basics. Geoengineering is shredding the ozone layer, altering the weather patterns, polluting our air, waters and soils.

It is also very important to have some idea of who you are speaking with and what aspect of the geoengineering issue they will be most interested in and affected by. Going too far into the “rabbit hole” is almost always counterproductive, stick to the basic straightforward facts. DON’T discredit the subject at hand by wandering into other issues that are not science based and that do not belong in this discussion.

3. Have Credible Data to Pass On To Others

This is not expensive or difficult. There are a number of tools that can and should be used for this purpose. The documentary “Look Up” is a very effective introduction tool. This film can be ordered at skyderalert.com. An additional tool is the power point presentation Climate Engineering, Weather Warfare and The Collapse of Civilization. This presentation is also available on DVD.

(Other power point presentations can be viewed on the geoengineeringwatch.org homepage.) 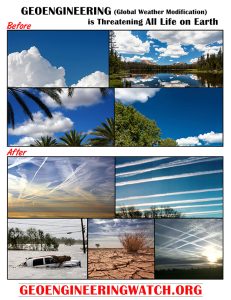 When passing on a DVD, it is much more effective to include an information flyer with it. For only 10 to 20 cents a copy, more or less, very important and compelling data can be passed on. Such a flyer will make it much more likely the DVD will actually get viewed. Flyer examples can be found and downloaded for free at geoengineeringwatch.org/ads. One of these examples can be used, or new ones can be made. Be sure all data on any flyers is simple, credible, and verifiable. Color glossy two sided information flyers can also be ordered from geoengineeringwatch.org, contact us at the web site.

4. Don’t Point to the Sky and Go Into a Rant, That Only Puts Up Defenses

If people are made uncomfortable, they will only tune out all that you are saying and focus their attention on how to end the conversation. Again, more often than not, lengthy conversations are not productive. As stated above, it only leads to uncomfortable situations for all concerned. A simple (and short) mention of the issue and its major consequences, and the passing on of a flyer with a DVD, can often be the most effective approach. It’s also helpful to mention that the government is not disclosing these programs and mainstream media is not covering the story. If people who are being introduced remain comfortable, they are most likely to examine the information being passed on when they have time in their own home or office.

5. Very Important Contacts Can and Should Be Made with the Internet

There are countless groups, organizations, and individuals that would care if they had any clue about the geoengineering programs. Environmental groups, Alzhiemer’s, autism, ADD, agriculture groups, journalists, etc. Locate such groups and send them a “heads up” email with some credible data attachments. Also, a link or two where they can learn more on the most dire issue of geoengineering. On the home page of geoengineeringwatch.org site is the “flaming arrow link”. This suggested email package of information is already set to go, just find appropriate people and groups to send it to. 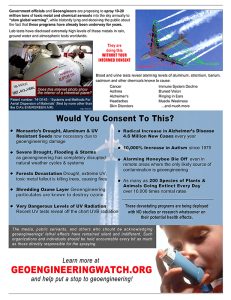 In a personal encounter, if someone is not receptive, or even argumentative, try to keep your composure. Confrontations only cause people to put up their defenses and they won’t hear a word you say. We are planting seeds of awareness, if done properly, the seeds will sprout. As the climate system continues to unravel (with climate engineering helping to fuel the fire), people will soon enough have no choice but to wake up.

If  we all pull together, we can and will soon reach “critical mass” in the effort to expose the on going global geoengineering programs. The decimation being caused to the planet, us, and all life on Earth is immense, it’s up to all of us to stop it. If we can simply reach this tipping point of awareness, the dominos will begin to fall in regard to the climate engineering programs. When the families of those participating in the various aspects of geoengineering realize that they are quite literally killing themselves and their children along with the rest of us, the equation will change. When the larger population realizes they have all been poisoned from the climate engineering, there will be a shock wave around the globe.

Please, forward this information to everyone you know. We are far beyond the point where we can worry about what people think of us personally. Our planet has no chance if we do not raise awareness and speak out.

In my experience, if you connect with people in a manner they can relate to, they will listen. I recently connected with the head of the Northern California Cattleman’s Association. What was he most interested in knowing? How geoengineering programs are negatively affecting him and his fellow ranchers, reducing rainfall, stunting the growth of native grasses and feed crops due to the toxic contamination and the shredding of the ozone layer (which also harms feed crops). These aspects of the global spraying are very clearly causing very negative impacts to him, so he wanted to know more.

If you learn enough about this issue to inform people how they personally are being affected, given what you specifically know about their concerns and interests, they will listen.

We have the power to expose and stop the ongoing geoengineering insanity if we work together in this all important battle. Make your voice heard. 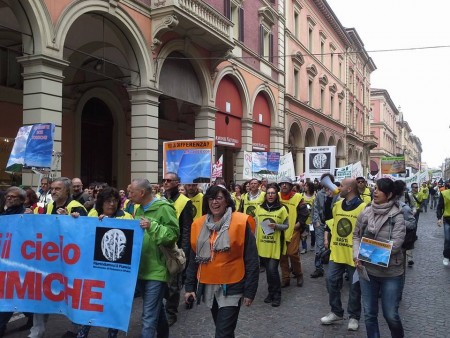 If you’re concerned, visit www.skyderalert.com and take a few minutes to view the trailer to the film “Look Up”, a newly released, award winning documentary narrated by William Baldwin. It is an excellent introduction to the ongoing issue of climate engineering / geoengineering.

We have included articles and information that will shine more light on this extremely important issue, one that is radically affecting our planet’s life support systems, and every one of us. Our only goal is that you will review what we have included, and we hope it will motivate your continued investigation of this unregulated – and devastating – climate modification programs that are being conducted globally.

You can learn more at:

You can find more documents and many pictures on these links:

Still not convinced weather modification is taking place or has been used in the past? Follow the links below. 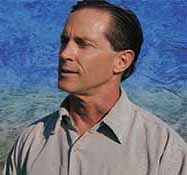 Dane Wigington has an extensive background in solar energy. He is a former employee of Bechtel Power Corp. and was a licensed contractor in California and Arizona. He currently owns a 1,600-acre ‘wildlife preserve’ next to Lake Shasta in Northern California, and his personal off-grid residence was featured in a cover article on the renewable energy magazine, Home Power.

Dane initially focused his efforts and energy on the geo-engineering issue when he began to lose very significant amounts of solar uptake due to ever-increasing “solar obscuration” caused from the aircraft spraying in his area. He also noted significant decline in forest health and began testing and researching into geo-engineering about a decade ago.

Today Dane is the lead researcher for geoengineeringwatch.org, investigating all levels of geo-engineering from chemtrails to HAARP. He assisted Michael Murphy with his acclaimed production of “What In The World Are They Spraying?” and has spoken extensively in a wide range of forums to explain the environmental dangers we face on a global level.