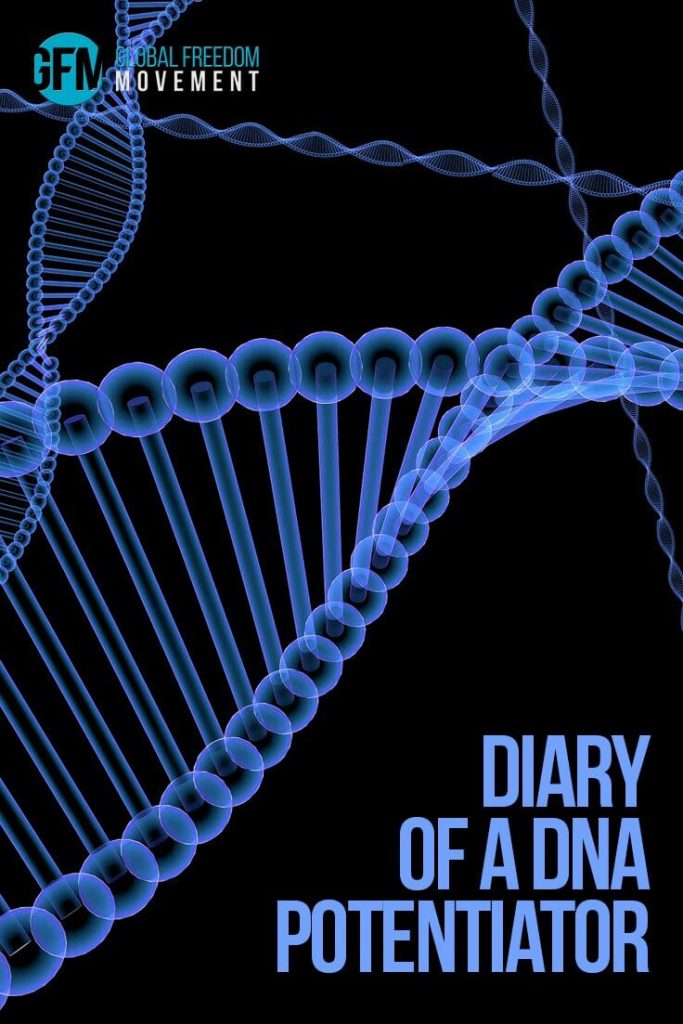 Diary of A DNA Potentiator is the first of two articles detailing my experience with systematic DNA activation utilizing a special formalized accelerated evolution technique known as the Regenetics Method. This introductory article focusing primarily on phase one (DNA Potentiation) is actually now relatively old, as it documents only the early stage/s of my experience. The article to follow is much more recently written and far more comprehensive, discussing the entire timeline and placing my experience in a much larger context that is directly applicable to all readers and humanity’s current situation and direction. Welcome to spiritual evolution accelerated.

Diary of a DNA Potentiator

So many of us have battled—or are currently battling with—some form of nagging illness or physical dysfunction that it staggers the mind. There may not be any magical, cure-all “quick fix” solution—but then again, we may be closer to it than we think.

As someone with myriad physical injuries sustained over the years through athletic pursuits or just outright clumsiness (or “bad luck”)—as well as having food allergies—I have longed for a “natural,” non-surgical and non-pharmaceutical solution to my ailments. On a more transpersonal level, as an author and researcher, I’ve been somewhat obsessed with the notion of finding powerful and permanent solutions to such problems so that I could disseminate them as widely as possible for the benefit of others. That’s why I’m going to tell you about my experience thus far with DNA activation, or more specifically, the first two stages of Sol Luckman’s Regenetics method: Potentiation and Articulation, respectively. (Sol is the author of Conscious Healing and Potentiate Your DNA, two books that I highly recommend.)

Without getting too much into the nitty-gritty of the procedure, DNA Potentiation is a sound-based “shamanic” healing technique that utilizes a unique property of a certain portion of human DNA: the 95–8% of our DNA which was dubbed decades ago as “junk” DNA—because scientists at the time had no idea what its purpose was. (It’s estimated that only about 1-3% of our DNA actually codes for the construction of proteins and enzymes—our basic physical structure, in other words. Some estimates go as low as 1%!)

In fact, a lot of that “junk” DNA is incredibly valuable to us because of its capacity to literally shift locations on the DNA strand and re-code sections of the genome. Hence, this “junk”—discovered in the 1940s by Nobel laureate Barbara McClintock—is referred to informally as “mobile elements” or “jumping DNA” (transposons and retrotransposons, more technically). It was transposons that McClintock discovered in the 1940s, and for which she received a Nobel prize in 1983. On the other hand, retrotransposons alone comprise as much as half of the nucleotides (DNA “building blocks”) on the genome. It was only as recently as 1988 that a group at the University of Pennsylvania showed that retrotransposons are actually active in human tissues and not simply inert junk.1

For a DNA Potentiation, you require (aside from the full set of instructions), a 528 Hertz tuning fork and something to strike it with (a hockey puck in my case). A fairly involved chanting procedure involving all of the vowel sounds is then carried out while you sound the tuning fork at specific intervals—overall it lasts for roughly 20 minutes.

So what does a 528 Hertz tuning fork and chanting have to do with jumping DNA? In short, the procedure makes your “junk” jump! You see, our DNA is responsive to language and sound, now a rigorously scientifically proven fact.2 The resonance between our jumping DNA and vocal intonations (as well as the 528 Hz Solfeggio tone) means that a shift or migration of mobile elements can be initiated with the correct procedure. (I get into a lot more detail with this in my book The Grand Illusion: A Synthesis of Science and Spirituality, but if you want to know the actual Potentiation procedure in full detail you’ll have to check out Sol’s fascinating book Potentiate Your DNA.3) 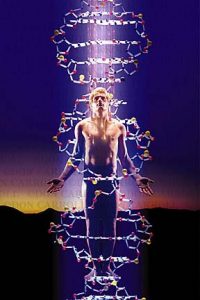 The whole point of this endeavour—for me at least—was to hopefully activate healing mechanisms in my DNA that were not functioning properly. First and foremost on my mind was the thought that this procedure might trigger some healing to take place in my damaged rotator cuffs (in the shoulders). I damaged the connective tissues in both shoulder joints when I was sixteen and they never healed properly. I had long since resigned myself to a lifetime of shoulder pain, weakness, and stiffness—I couldn’t even lie on my side in a normal manner to sleep at night because of the slight pressure on my shoulders and the resulting pain.

My hope was to instigate some major healing in my shoulders through DNA Potentiation, and I wasn’t disappointed. On the 12th of September 2011, two days before my birthday, I performed my own Potentiation (and have since performed several more for other people seeking to upgrade their health and quality of life). It left me with a subtle “buzz” or tingling in my shoulders—and virtually overnight I noticed my shoulder joints started feeling better. I actually kept a “Post Potentiation Log” to record any changes I noticed over the subsequent weeks. Here are the first two entries:

12th September: Potentiation performed. Slept well. Shoulder not as sore to sleep on?
13th: Significant reduction in pain [in] left shoulder. Hasn’t felt this good in years. Hardly any discomfort swinging [arms] across chest where before [there] was sharp pain. Slept better.

As you can see, there was an immediate improvement in the state of my shoulders. Around five to six weeks later, my entry read:

Nov. 20–27th: Noticed in this approx. time frame that right knee pain virtually gone. Had persisted for approx. 7–9 months? Can sleep with virtually no shoulder discomfort either side now.

In addition to my shoulder problems, I had been experiencing some “anomalous” and troubling knee pain in my right knee on the outer periphery of the joint for some months, which I reasoned at the time may have been some kind of cartilage damage (all I did was crouch down one day and crack!—new injury). At some point post-Potentiation the pain simply disappeared.

By this stage my shoulders were feeling infinitely better than they had for twelve years, and the right rotator cuff now gives me virtually no pain or discomfort, feeling like a new joint. The left side is also massively improved and strong enough to perform movements that previously caused sharp stabbing pain and weakness. I was able to start lifting weights over my head again without these symptoms—a monumental leap forward. 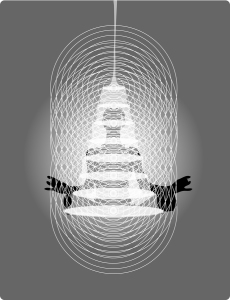 I should note that since Articulation I have noticed a significant improvement in my food sensitivities, including sensitivities to sugar, wheat, dairy, and gluten. In fact, on a recent visit to see family in Sydney I inadvertently triggered a fairly significant allergic reaction and detox response by eating wheat, gluten, and dairy in amounts far higher than I normally would have allowed (hey it was my Nan’s 90th birthday celebration after all!). Following this somewhat unpleasant scenario, which I had failed to anticipate and did not realise was even possible(!), my allergies to these foods have markedly decreased, and I can tolerate them in far higher amounts (not that I consider that to be healthy eating—wheat is especially nasty!).

By the time you read this, dear truth-seeker, I will have passed through the third stage in the Regenetics Method: Elucidation. Aimed at the emotional subtle body, it is also believed to target and activate the brain’s prefrontal cortex—a requisite, according to Sri Bhagavan, for experiencing a sustained living God-presence or “God-realization”4 (not to be confused with a transient Satori experience). I will continue to document the changes I go through on my Facebook pages5 and website.

All in all it is obvious that Luckman and his partner Leigh have devised a truly revolutionary healing system—one that effects permanent change at the most fundamental biological levels. It emerged from a horror rollercoaster ride ultimately triggered by a catastrophic hepatitis and yellow-fever vaccine abreaction in which Luckman sought remedies to his deteriorating health—for a gruelling ten years. Truly, Luckman had embarked upon his very own dark night of the soul—and what a long “night” it was! It is obvious reading Potentiate Your DNA that Luckman’s DNA coding mechanisms had been damaged, and no one knew how to repair them.

Just how bad did things get for him, physically? In his own words, “I developed devastating food and environmental allergies, extreme chronic fatigue, bizarre muscle twitching, facial neuralgia, awful bloating, terrible insomnia, horrific migraines, and twenty-odd other mysterious symptoms that baffled every doctor and therapist I visited—and I visited many.”6

Eventually, Luckman despaired not only at the impermanent symptom relief offered by various healing modalities, such as allergy clearing and Chi Gong (which did, however, play an important role in his eventual recovery), but also at the futile input of myopic allopathic doctors who could offer no insight into the reason for his condition—let alone offer real solutions.

Luckman’s story is a fascinating one, and I’m not going to attempt telling it all here. Needless to say, he eventually emerged transformed and victorious from his arduous “dark night”—which involved massive research and experimentation—with the Regenetics Method. Not only did it repair his damaged DNA and eliminate his debilitating food allergies (among other wonderful effects), returning him to full strength, but it has done similar things for thousands of other people who did not know where else to turn for relief. In fact, this four-stage system of “wholing” eventually upgrades the individual on every primary level (over a 27 month timeline), to leave them at a point of health and conscious awareness that no disease management approach (aimed at treating and/or suppressing individual symptoms instead of addressing the real causes) could ever hope for.

This truly is personal evolution accelerated, and that is why I went and got myself certified by the Phoenix Regenetics Center to do these DNA activations for people.

This article was written in 2012. Part Two can be read here!