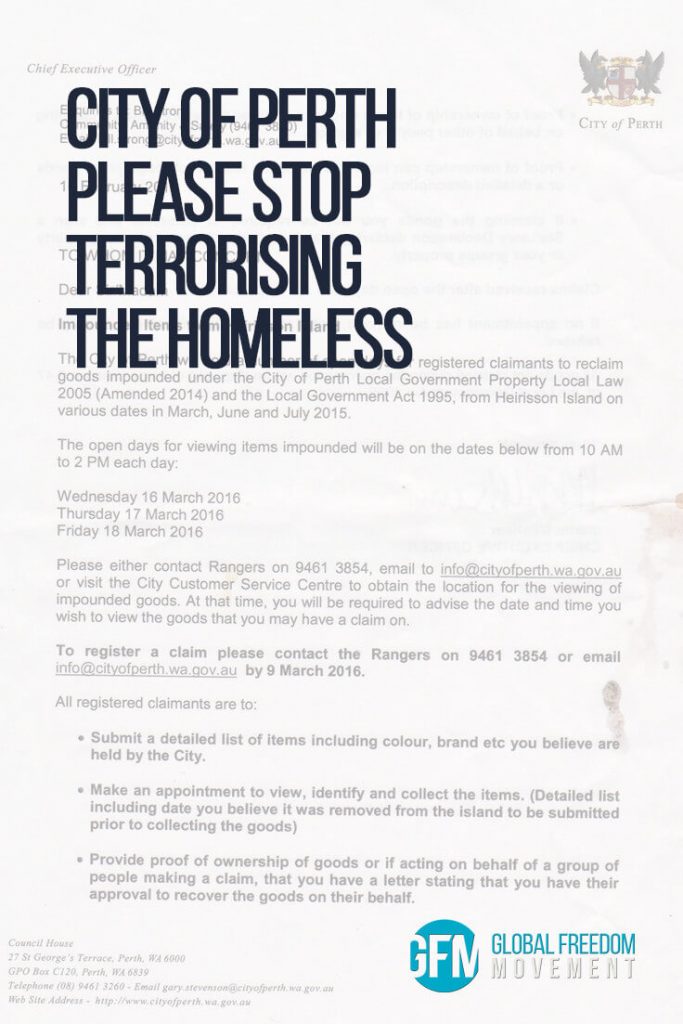 Around midday today (April 5th) Channel 9 news reported that City of Perth rangers with police accompaniment had “swooped in” and were raiding Matargarup homeless refuge and stealing the belongings of the poor for the eleventh time! They call it “de-camping” in their Orwellian newspeak.

Their bland one-liner fails to capture the raging travesty and national source of shame this conduct has become, for this is no less than the 11th time City of Perth has directed their rangers and police lackeys to invade the camp and, presumably, once more confiscate/thieve meager belongings from the vulnerable people who reside at Matargarup homeless camp. Yes, Perth rangers and police are routinely tasked with bullying and thieving from the homeless (hardly surprising if you’ve been observing the steady deterioration of Australia into a fully fledged police state where police are merely glorified tax collectors and crowd control for the frustrated and disenfranchised).

Also worthy of note, to a lesser extent, is that the belongings which were previously unlawfully confiscated/stolen in the nine or ten previous raids are not allowed to be held for more than a week – yet another rule the City of Perth has violated in its ongoing war against the homeless and impoverished. Tents and other essentials have still not been returned. City of Perth (a corporate entity and legal fiction) still shows no signs of righting that wrong and acting in honour. What a surprise. An update emanating from 9 News at around 1:30 pm stated:

Personal belongings are being seized from the protestor camp on Heirisson Island, including a large bag filled with toys belonging to the children camping on the island.

One homeless family began yelling at rangers after a four-year-old boy’s toy was taken away in the decamping exercise. Perth Now

Stealing children’s toys. How very grand of you, City of Perth. We want to know where the buck stops, and frankly we are tired of waiting for the Lord Mayor Lisa Scaffidi and the Executive Management Team of City of Perth to do the right thing and be accountable for these morally repugnant activities. It appears that NO ONE involved at ANY level believes themselves to be the slightest bit responsible for this travesty of justice and continued criminal campaign against the vulnerable at Matargarup (better known as Heirrisson Island). Remember what happened to ousted CEO Gary Stevenson? Those of us who held out a glimmer of hope that his sudden removal signalled a meaningful change in the orientation of City of Perth’s moral compass have been bitterly disappointed. The attacks on the homeless continue though Stevenson is gone; replaced by Martin Mileham. It is high time to turn the glare of public critique and scrutiny upon those purportedly steering the ship.

The Executive Management Team consists of:

And let’s not forget Lord Mayor of Perth Lisa Scaffidi, the subject of a “damning” CCC report that found she had engaged in “serious misconduct.” She currently awaits the outcome of a separate government inquiry.

Back to Matargarup and the continued City of Perth ranger and police raids: If this isn’t state-sponsored terrorism then what is? This is systematic, cyclical, legally sanctioned psychological violence and physical theft and deprivation against defenceless homeless people exercising basic human rights and minding their own business. I call that terrorism. Forget ISIS and Muslim extremists, our biggest concern should be the government and legal apparatuses that influence every nook and cranny of daily living – and use taxpayer money to brutalise the homeless (and plenty of taxpayers while they’re at it!).

So far, the only true support from those in positions of influence on this issue (apart from the courageous folks at The Stringer) has been from Senator Sue Lines, who lent her support to the people of Matargarup after learning about a raid last week which saw homeless family fined $500; a fine which could see them facing jail time if they don’t pay. “The policy of having people who cannot pay fines serve gaol time is not only costly to the taxpayer, it also ruins lives, families and communities,” Sue states.

On the 29th of March 2016 a homeless family of 7 (2 adults, 5 children) were issued with a $500 parking infringement by the City of Perth for a broken down caravan. The vehicle is their home, their only asset, and they don’t have the ability to fix it.

Sue organised a GoFundMe campaign to support the family – which has garnered support from the community. To donate, please visit this link. Sue has also written to Lord Mayor Lisa Scaffidi to ask her to rescind the fine. 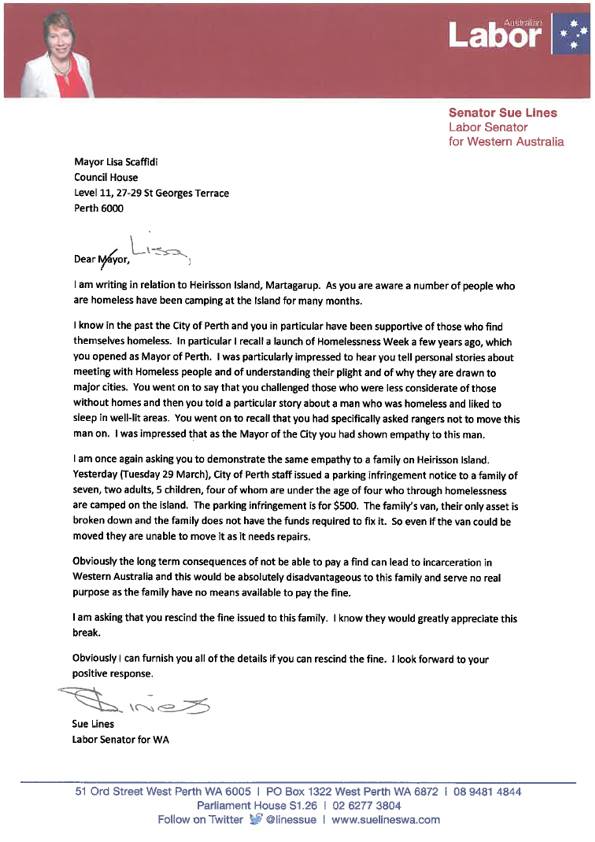 Yahoo News reports that “media outlets covering the latest development were fined by parking inspectors but the tickets were later waived.” We’re not seeing double standards, are we?

Below, elder Herbert Bropho (with whom we spoke at length with here) assisting an otherwise helpless and homeless man in the city in February to offer him safety and camaraderie at Matargarup. Bropho, Clinton Pryor and others spent an entire night on the streets of Perth assisting homeless in this way, whilst others walked by.

This lady we came across her in Northbridge with a kids sleeping in a alleyway sleep in a tent next to Robertson park. We sat back for a bit before we approach her and watch people how they act after drinking at the night clubs in Northbridge going pass her tent. People where talking photo of her and laughing at her. She was telling people just leave her alone let her and her family sleep. So us guys had a none. So we walk toward her tent with her kids. They where telling us to go away. Once we got close to her tent we had a talk with her about us on heirisson island. She then came out of her tent then talk with us. We told her that her and her family can come to the island and camp. I was glad and happy we came across of a family last night. So we know we help a family out to try get them to come on the island. [sic] 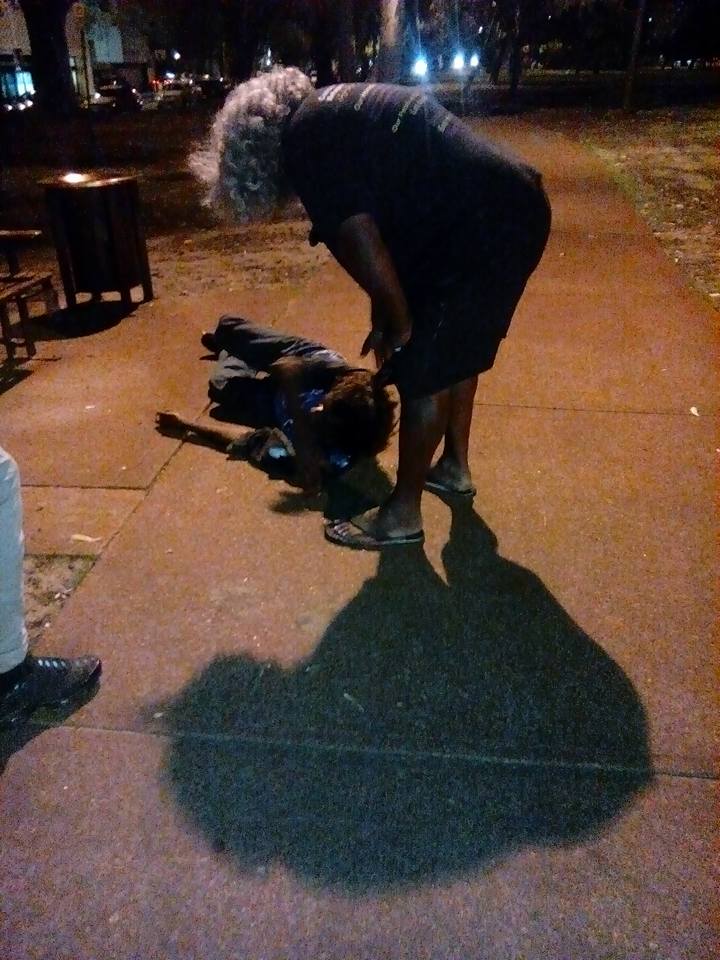 Homeless and suicide prevention researcher Gerry Georgatos told PerthNow  the City of Perth have gone about the process the wrong way.

Mr Georgatos said 140 people have been living on the island in recent months. He said families have faced trauma today and these people will be sleeping on the city streets tonight.

Lisa Scaffidi, City of Perth management team, and Councillors, why is this STILL happening?

We find it utterly disgusting that these police officers use their time and resources to terrorize the HOMELESS – and if not at your command, then whose? Where does the buck stop? We want to know.

The Australian public wants to know why the City of Perth​ continues to attack the weak and vulnerable and act in blatant contradiction to the will of the general public – across the nation – which has been so supportive of the homeless camp and community-building it fosters, repeatedly donating mattresses, food, and more, only to have it stolen by the State.

Feel free to email City of Perth with your concerns

If you are not satisfied with the way the City of Perth has reasonably undertaken to provide a service or attempted to resolve an issue, you are entitled to make a formal complaint. Please complete THIS FORM and provide clear and complete details so that the matter can be fully investigated.

You may also contact the Mayor, Deputy Mayor and Councillors directly below. 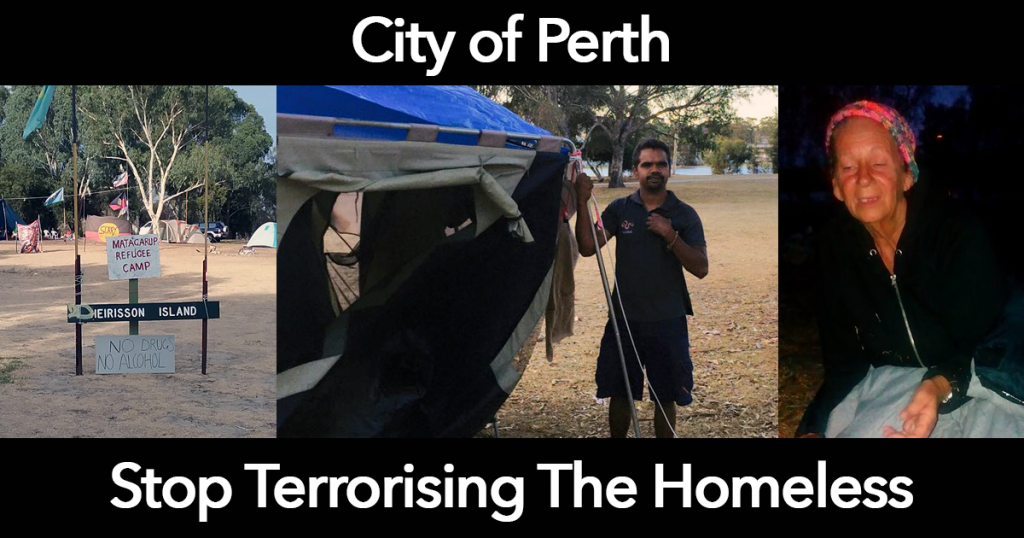