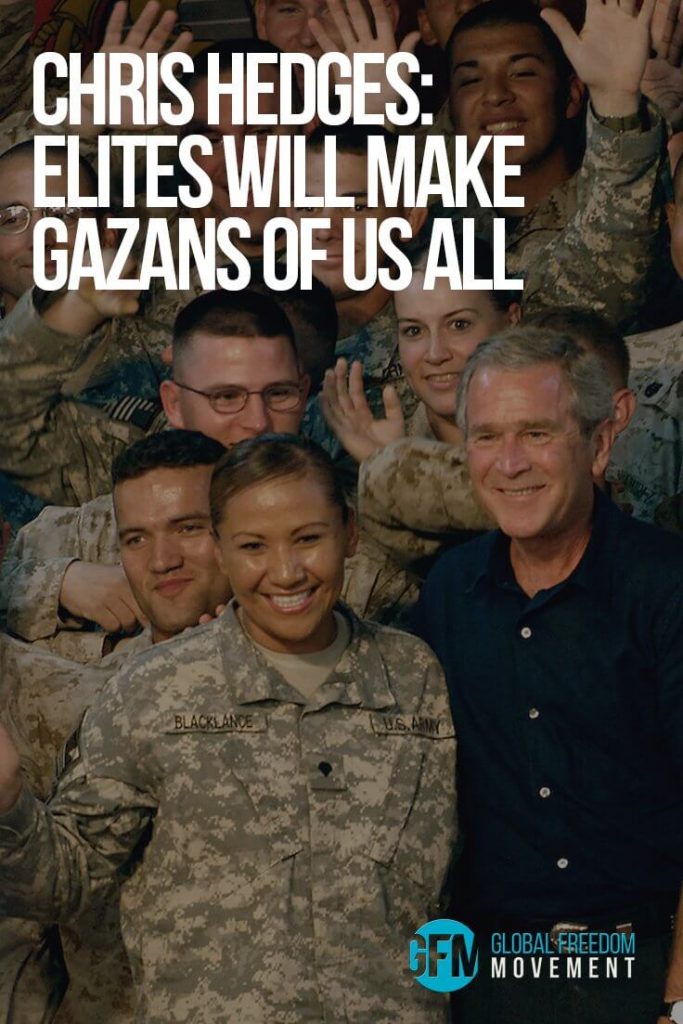 This article was originally posted here on Nov 19, 2012. The author, Chris Hedges, perfectly describes the class war we find ourselves in the midst of; a war which tauntingly and ruthlessly overlooks International Law, basic human rights, needs, and liberties are ignored, in preference of economics, gross domestic product, efficiency, and progress.

The longer this worldwide disparity and inequality is perpetuated, the more the masses will revolt and the faster we will internally replicate the Israeli model of domestic control—drones overhead, all dissent criminalized, SWAT teams busting through doors, deadly force as an acceptable form of subjugation, food used as a weapon, and constant surveillance.

Sobering, yet real. The power of the elite can only come from one place. It is up to us to gain the power back, eliminate separation, destruction, corruption, war, greed – and transform this world into one based on pure, universal love.

Elites Will Make Gazans of Us All

Gaza is a window on our coming dystopia. The growing divide between the world’s elite and its miserable masses of humanity is maintained through spiraling violence. Many impoverished regions of the world, which have fallen off the economic cliff, are beginning to resemble Gaza, where 1.6 million Palestinians live in the planet’s largest internment camp. These sacrifice zones, filled with seas of pitifully poor people trapped in squalid slums or mud-walled villages, are increasingly hemmed in by electronic fences, monitored by surveillance cameras and drones and surrounded by border guards or military units that shoot to kill. These nightmarish dystopias extend from sub-Saharan Africa to Pakistan to China. They are places where targeted assassinations are carried out, where brutal military assaults are pressed against peoples left defenseless, without an army, navy or air force. All attempts at resistance, however ineffective, are met with the indiscriminate slaughter that characterizes modern industrial warfare.

In the new global landscape, as in Israel’s occupied territories and the United States’ own imperial projects in Iraq, Pakistan, Somalia, Yemen and Afghanistan, massacres of thousands of defenseless innocents are labeled wars. Resistance is called a provocation, terrorism or a crime against humanity. The rule of law, as well as respect for the most basic civil liberties and the right of self-determination, is a public relations fiction used to placate the consciences of those who live in the zones of privilege. Prisoners are routinely tortured and “disappeared.” The severance of food and medical supplies is an accepted tactic of control. Lies permeate the airwaves. Religious, racial and ethnic groups are demonized. Missiles rain down on concrete hovels, mechanized units fire on unarmed villagers, gunboats pound refugee camps with heavy shells, and the dead, including children, line the corridors of hospitals that lack electricity and medicine.

The impending collapse of the international economy, the assaults on the climate, the resulting droughts, flooding, precipitous decline in crop yields and rising food prices are creating a universe where power is divided between the narrow elites, who hold in their hands sophisticated instruments of death, and the enraged masses. The crises are fostering a class war that will dwarf anything imagined by Karl Marx. They are establishing a world where most will be hungry and live in fear, while a few will gorge themselves on delicacies in protected compounds. And more and more people will have to be sacrificed to keep this imbalance in place.

Because it has the power to do so, Israel—as does the United States—flouts international law to keep a subject population in misery. The continued presence of Israeli occupation forces defies nearly a hundred U.N. Security Council resolutions calling for them to withdraw. The Israeli blockade of Gaza, established in June 2007, is a brutal form of collective punishment that violates Article 33 of the Fourth 1949 Geneva Convention, which set up rules for the “Protection of Civilian Persons in Time of War.” The blockade has turned Gaza into a sliver of hell, an Israeli-administered ghetto where thousands have died, including the 1,400 civilians killed in the Israeli incursion of 2008. With 95 percent of factories shut down, Palestinian industry has virtually ceased functioning. The remaining 5 percent operate at 25 to 50 percent capacity. Even the fishing industry is moribund. Israel refuses to let fishermen travel more than three miles from the coastline, and within the fishing zone boats frequently come under Israeli fire. The Israeli border patrols have seized 35 percent of the agricultural land in Gaza for a buffer zone. The collapsing infrastructure and Israeli seizure of aquifers mean that in many refugee camps, such as Khan Yunis, there is no running water. UNRWA (the United Nations Relief and Works Agency for Palestine Refugees in the Near East) estimates that 80 percent of all Gazans now rely on food aid. And the claim of Israeli self-defense belies the fact that it is Israel that maintains an illegal occupation and violates international law by carrying out collective punishment of Palestinians. It is Israel that chose to escalate the violence when during an incursion into Gaza earlier this month its forces fatally shot a 13-year-old boy. As the world breaks down, this becomes the new paradigm—modern warlords awash in terrifying technologies and weapons murdering whole peoples. We do the same in Afghanistan, Iraq, Pakistan, Yemen and Somalia.

Market forces and the military mechanisms that protect these forces are the sole ideology that governs industrial states and humans’ relationship to the natural world. It is an ideology that results in millions of dead and millions more displaced from their homes in the developing world. And the awful algebra of this ideology means that these forces will eventually be unleashed on us, too. Those who cannot be of use to market forces are considered expendable. They have no rights and legitimacy. Their existence, whether in Gaza or blighted postindustrial cities such as Camden, N.J., is considered a drain on efficiency and progress. They are viewed as refuse. And as refuse they not only have no voice and no freedom; they can be and are extinguished or imprisoned at will. This is a world where only corporate power and profit are sacred. It is a world of barbarism.

“In disposing of man’s labor power the system would, incidentally, dispose of the physical, psychological, and moral entity ‘man’ attached to that tag,” Karl Polanyi wrote in “The Great Transformation.” “Robbed of the protective covering of cultural institutions, human beings would perish from the effects of social exposure; they would die as the victims of acute social dislocation through vice, crime, and starvation. Nature would be reduced to its elements, neighborhoods and landscapes defiled, rivers polluted, military safety jeopardized, the power to produce food and raw materials destroyed. Finally, the market administration of purchasing power would periodically liquidate business enterprise, for shortages and surfeits of money would prove as disastrous to business as floods and droughts in primitive society. Undoubtedly, labor, land, and money markets are essential to a market economy. But no society could stand the effects of such a system of crude fictions even for the shortest stretch of time unless its human and natural substance as well as its business organization was protected against the ravages of this satanic mill.”

There are 47.1 million Americans who depend on food stamps to eat. The elites are plotting to take these food stamps away, along with other “entitlement” programs that keep the poor from destitution. The slashing of trillions of dollars from Medicare, Medicaid and other social programs, given the political impasse in Washington and the looming “fiscal cliff,” now seems certain. There are 50 million people considered to be living below the poverty line, but because the poverty line is so low—$22,350 for a family of four—this figure means nothing. Add the tens of millions of Americans who live in a category called “near poverty,” including all those families attempting to live on less than $45,000 a year, and you have at least 30 percent of the country living in poverty. Once these people figure out that there is no economic recovery, that their standard of living is going to continue to drop, that they are trapped, that hope in the future is an illusion, they will become as angry as protesters in Greece and Spain or the militants in Gaza or Afghanistan. Banks and other financial corporations, handed trillions in interest-free money from the Federal Reserve, meanwhile hoard $5 trillion, much of it looted from the U.S. Treasury. The longer this worldwide disparity and inequality is perpetuated, the more the masses will revolt and the faster we will internally replicate the Israeli model of domestic control—drones overhead, all dissent criminalized, SWAT teams busting through doors, deadly force as an acceptable form of subjugation, food used as a weapon, and constant surveillance.

In Gaza and other blighted parts of the globe we see this new configuration of power. What is happening in Gaza, like what is happening to people of color in marginal communities in the United States, is the model. The techniques of control, whether carried out by the Israelis or militarized police units in our inner-city drug wars, whether employed by military special forces or mercenaries in Pakistan, Afghanistan or Iraq, are tested first and perfected on the weak and the powerless. Our callous indifference to the plight of the Palestinians, and the hundreds of millions of poor packed into urban slums in Asia or Africa, as well as our own underclass, means that the injustices visited on them will be visited on us. In failing them we fail ourselves.

As the U.S. empire implodes, the harsher forms of violence employed on the outer reaches of empire are steadily migrating back to the homeland. At the same time, the internal systems of democratic governance have calcified. Centralized authority has devolved into the hands of an executive branch that slavishly serves global corporate interests. The press and the government’s judiciary and legislative branches have become toothless and decorative. The specter of terrorism, as in Israel, is used by the state to divert gargantuan expenditures to homeland security, the military and internal surveillance. Privacy is abolished. Dissent is treason. The military with its mantra of blind obedience and force characterizes the dark ethic of the wider culture. Beauty and truth are abolished. Culture is degraded into kitsch. The emotional and intellectual life of the citizenry is ravaged by spectacle, the tawdry and salacious, as well as by handfuls of painkillers and narcotics. Blind ambition, a lust for power and a grotesque personal vanity—exemplified by David Petraeus and his former mistress—are the engines of advancement. The concept of the common good is no longer part of the lexicon of power. This, as the novelist J.M. Coetzee writes, is “the black flower of civilization.” It is Rome under Diocletian. It is us. Empires, in the end, decay into despotic, murderous and corrupt regimes that finally consume themselves. And we, like Israel, are now coughing up blood.

At the Global Freedom Movement, we are all very present to the fact that our world is in dire need of transformation. We recognise that if we don’t transform now, the elites will make Gazan’s of us all. They truly will. It’s happening daily. Our mission is to stop this process and instead place the power back into the hands of the people, where it has always belonged.

Thanks for being a part of the Global Freedom Movement and joining us on the journey.