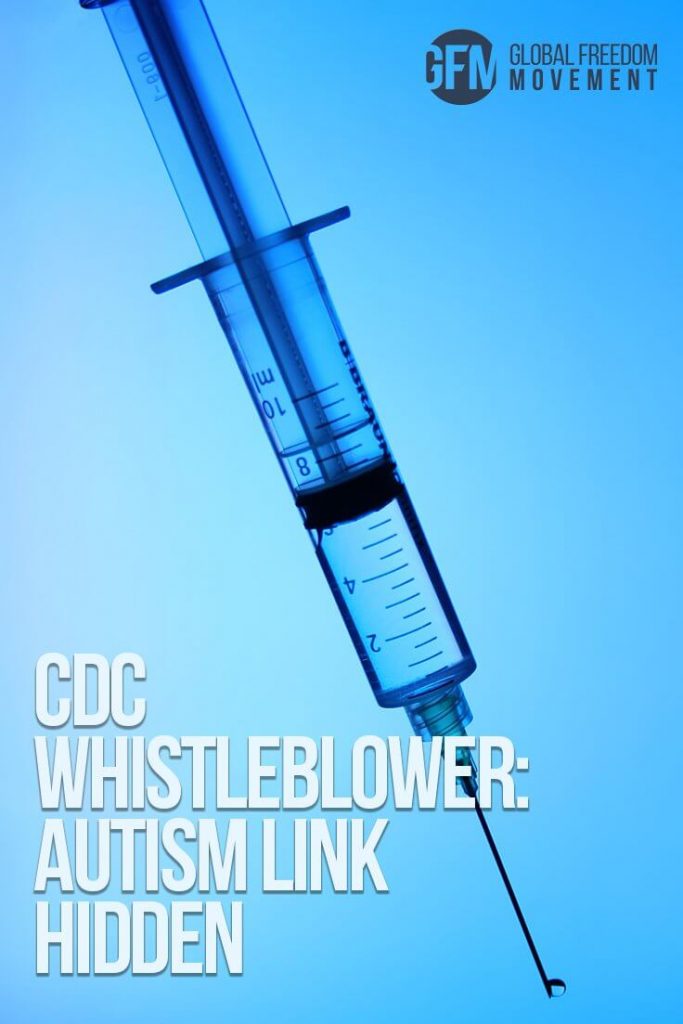 The Centre for Disease Control has a tagline: CDC 24/7. Saving lives. Protecting people. It seems they may not be adhering to this mission statement at all. The CDC whistleblower autism link revelation has seen the department’s integrity shot to smithereens.

CDC whistleblower: “Oh My God…what we did” by Jon Rappoport

This article was originally posted here.

On October 14, Brian Hooker and Andrew Wakefield sent an official and detailed complaint to the CDC and the US Dept. of Health and Human Services.

The devastating and explosive complaint concerns scientific misconduct in a now-infamous 2004 CDC study, which gave the MMR vaccine a free pass and concluded the vaccine had no connection to autism.

CDC whistleblower William Thompson was a co-author on that study, and on August 27 he admitted he and his co-authors committed fraud and covered up the vaccine-autism connection.

(The full 34-page complaint can also be accessed via Age of Autism, here)

The complaint references a 5/24/14 phone call between whistleblower Thompson and Brian Hooker. The call was recorded.

Thompson references one aspect of the fraud, a group of children with “isolated autism,” who were at higher risk of developing autism after receiving the MMR vaccine—the true data on these children were intentionally omitted from the study. Thompson says to Hooker:

“…the effect [autism] is where you would think it would happen. It is with the kids without other conditions [“isolated autism”]…I’m just looking at this and I’m like ‘Oh my God….I cannot believe we did what we did…but we did [bury the data on these children]…It’s all there…It’s all there. I have handwritten notes.’”

Concerning the overall fraud he committed in the 2004 study, Thompson states, in another phone conversation with Brian Hooker, “I have a boss who’s asking me to lie…Higher ups wanted to do certain things and I went along with it. In terms of command, I was 4 out of 5.”

Thompson named several of those higher ups. They were his co-authors on the 2004 study: Coleen Boyle, Marshalyn Yeargin-Allsop, and Frank Destefano.

In other words, those co-authors were among those who wanted Thompson to commit fraud.

This is highly significant, because Destefano and Boyle are not merely researchers. They are also high-ranking executives at the CDC, in the area of vaccines—director of the Immunization Safety Office (Destefano) and director of the National Center on Birth Defects and Developmental Disabilities (Boyle).

As the complaint states, Thompson wrote a note to the head of the CDC at the time (2004), Julie Gerberding. He was very nervous about a presentation he was due to make at a large Institute of Medicine vaccine-autism meeting.

Thompson wrote: “I will have to present several problematic results relating to statistical associations between receipt of the MMR vaccine and autism.”

Thompson was considering blowing the whistle, in public.

Gerberding never answered his note. Thompson did not make his presentation.

But we know this. After Gerberding stepped down as head of the CDC in 2009, she went to work for Merck, assuming the position of president of Merck Vaccines.

That was, of course, the vaccine at the center of the whole 2004 fraud at the CDC. The vaccine whose connection to autism was buried.

To say this merging of facts is explosive is a vast understatement.

But the major media, who will report and trumpet flimsy scandals with great enthusiasm, have instituted and maintained a total blackout on this one.

Can they begin to imagine what parents of children who received the MMR vaccine, and then developed autism, think and feel about all this?

About the author: Jon Rappoport

The author of three explosive collections, THE MATRIX REVEALED, EXIT FROM THE MATRIX, and POWER OUTSIDE THE MATRIX, Jon was a candidate for a US Congressional seat in the 29th District of California. He maintains a consulting practice for private clients, the purpose of which is the expansion of personal creative power. Nominated for a Pulitzer Prize, he has worked as an investigative reporter for 30 years, writing articles on politics, medicine, and health for CBS Healthwatch, LA Weekly, Spin Magazine, Stern, and other newspapers and magazines in the US and Europe. Jon has delivered lectures and seminars on global politics, health, logic, and creative power to audiences around the world. You can sign up for his free emails at NoMoreFakeNews.com.