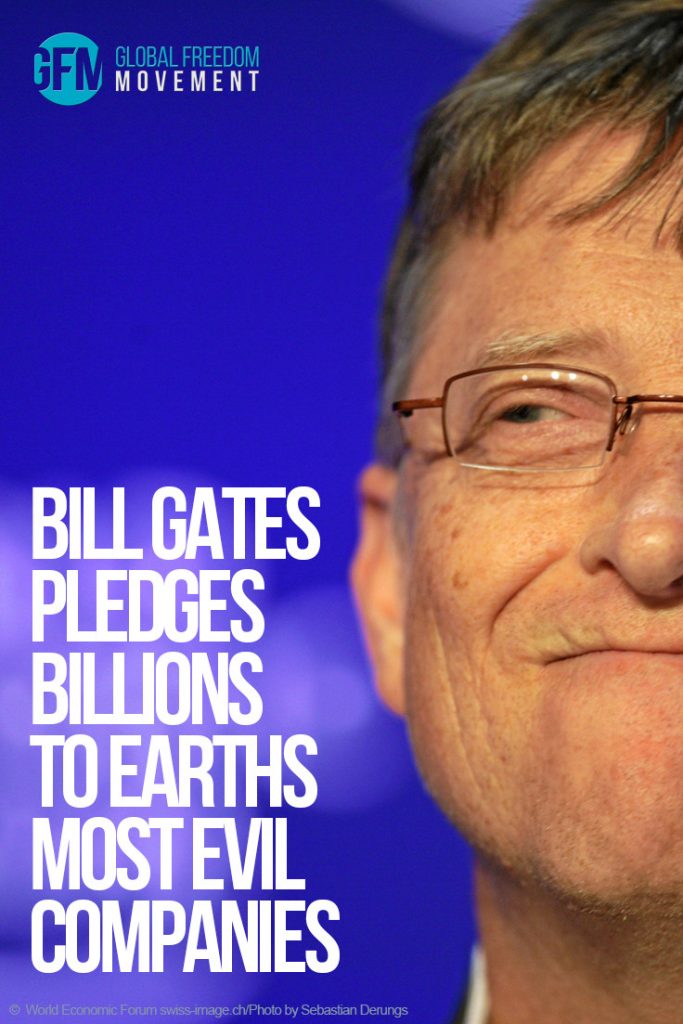 On the surface, and particularly within mainstream media channels, Bill Gates is purported to be a modern day saint; a man who gives his time, energy, and money to the world graciously in an effort to prevent the world from the ravages of hunger, sickness and death. The reality is far more sinister than one could imagine.

In 2015, Bill and Melinda Gates revealed within the “Bill Gates Letter” that they had an ambitious vision dubbed “Our Big Bet”, which states that “The lives of people in poor countries will improve faster in the next 15 years than at any other time in history. And their lives will improve more than anyone else’s.”

[W]e think the next 15 years will see major breakthroughs for most people in poor countries. They will be living longer and in better health. They will have unprecedented opportunities to get an education, eat nutritious food, and benefit from mobile banking. These breakthroughs will be driven by innovation in technology — ranging from new vaccines and hardier crops to much cheaper smartphones and tablets — and by innovations that help deliver those things to more people.

The rich world will keep getting exciting new advances too, but the improvements in the lives of the poor will be far more fundamental — the basics of a healthy, productive life. It’s great that more people in rich countries will be able to watch movies on super hi-resolution screens. It’s even better that more parents in poor countries will know their children aren’t going to die.1

As you’ll read in the article below, Bill Gates unending support for, and investment in companies whose actions are causing immeasurable harm to our planet illustrate he certainly does not have our best interests at heart. Gates cloaks these questionable investments and depopulation agenda under the guise of “saving children”—but it certainly does not fool us. Via an outspoken desire to control and reduce the population, links to eugenics (Gates’ parents were proud supporters of Planned Parenthood—whose founder, Margaret Sanger, shaped the eugenics movement in America. Her views and those of her peers in the movement contributed to compulsory sterilization laws in 30 U.S. states that resulted in more than 60,000 sterilizations of vulnerable people, including people she considered “feeble-minded,” “idiots” and “morons.”2), and with the continued promotion of vaccines as the greatest invention of mankind, Gates illustrates that he has a different (and disturbing) agenda, far from what mainstream channels propose.

This article was originally posted by Tony Geren for the Pontiac Tribune on March 19, 2015 under a creative commons licence. 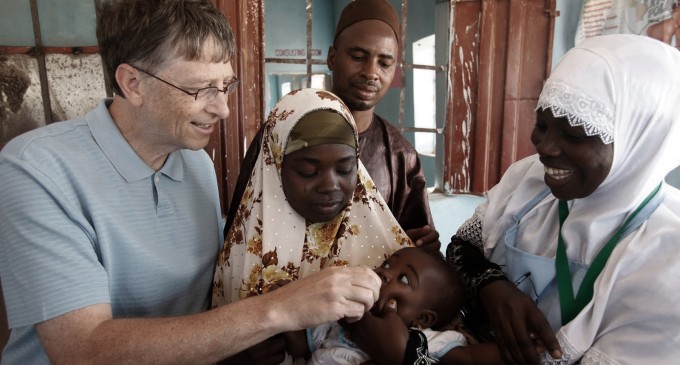 37% OF BILL GATES’ NET WORTH WOULD END WORLD HUNGER. INSTEAD, HE INVESTS BILLIONS OF DOLLARS INTO CORPORATIONS BLAMED FOR MANY OF THE SAME HEALTH ISSUES THE GATES FOUNDATION SEEKS TO CURE.

The Los Angeles Times revealed back in 2007 that the Bill and Melinda Gates Foundation has made millions of dollars each year from companies blamed for many of the same social and health problems the Foundation seeks to address.

The LA Times investigation revealed the Gates Foundation’s humanitarian concerns are not reflected in how it invests its money. In the Niger Delta — where the Foundation funds programs to fight polio and measles – the Foundation has also invested more than $400 million dollars in companies including Royal Dutch Shell, Exxon Mobil Corp, and Chevron. These oil firms have been responsible for much of the pollution many blame for respiratory problems and other afflictions among the local population.

The Gates Foundation also has investments in sixty-nine of the worst polluting companies in the US and Canada, including Dow Chemical. It holds stakes in pharmaceutical companies whose drugs cost far beyond what most AIDS patients around the world can afford. Other companies in the Foundation’s portfolio have been accused of transgressions including forcing thousands of people to lose their homes; supporting child labor; and defrauding and neglecting patients in need of medical care.

With an endowment larger than all but four of the world’s largest hedge funds, the Bill & Melinda Gates Foundation is easily one of the most powerful charities in the world. According to its website, the organization “works to help all people lead healthy, productive lives.” So how do the investments of the foundation’s $36 billion investing arm, the Gates Foundation Trust, match up to its mission? We dug into the group’s recently released 2012 tax returns to find out.

The Gates Foundation did not respond to Mother Jones’ requests for comment; however, its investment policy says the the trust’s managers “consider other issues beyond corporate profits, including the values that drive the foundation’s work.”

In its most recent annual report to investors, private prison company GEO group listed some risks to its bottom line, including “reductions in crime rates” that “could lead to reductions in arrests, convictions and sentences,” along with immigration reform and the decriminalization of drugs. One year after Mother Jones reported the foundations investment in this company, the philanthropy’s trust will not say if one of its most controversial holdings is still on its books. Military contractor DynCorp ($2.5 million donated by the foundation), meanwhile, has faced allegations of fraud, mismanagement, and even slavery from the Middle East to Eastern Europe. For Bill Gates to fund  corporations such as Dyncorp, a military contractor, which financed the entire Iraq war, while 37% of his net worth could end world hunger, is not noble, and its ridiculous to consider it charity.

A large portion of the world’s vaccines are given to the Third World as “charity,” when the underlying conditions of economic impoverishment, poor nutrition, chemical exposures, and political unrest are never addressed. Helping the effort against polio is a noble and inspiring thing to do. In India, Bill Gates’ funded polio vaccine is said to have wiped out the disease, which is considered to be a landmark achievement. But the country now has the world’s highest rate of non-polio AFP (acute flaccid paralysis) cases, which is linked entirely to his vaccinations. AFP is a condition in which a patient suffers from paralysis that results in floppy limbs due to reduced muscle tone. While AFP is symptomatic of polio, it can be caused by other diseases such as the Guillain Barre Syndrome and nerve lesions as well—the primary cause fuelling the argument that India is not really free of wild polio virus.

There is a dirty secret in the vaccine business that is very well documented: the live oral polio vaccine can actually spread polio and causes AFP. This is very well-known throughout the world, but in the U.S. mainstream media, this information is seldom, if ever, published. As usual, we need to research further past the mainstream media outlets to find out what is happening with vaccines around the world.

LiveMint in India reported on the polio-free myth in India, explaining how the live polio vaccine was responsible for increases in paralysis. LiveMint is the second largest business newspaper in India and has an exclusive relationship with the Wall Street Journal. So this report was from the “mainstream” media in India.

What is clear from this report, and well documented in peer-reviewed literature, is that the term “polio-free status” is completely meaningless. The designation of a country as “polio-free” is simply a triumphant marketing cry  to continue promoting polio vaccines, even in the face of overwhelming evidence that oral polio vaccines do far more harm than good.

The oral polio vaccine is banned in the United States and many other countries. The truth is that the reality is not pretty as we’d like to believe. Bill Gates, and his very charitable organization, is part of the problem, while funding exactly what is wrong with the world. From dangerous vaccinations, to funding war, to Bill Gates buying 500,000 shares of geo-engineering corporation, Monsanto. Time to expose him just like everyone else perpetuating the failures of our system. Because no matter how humanitarian they can appear to be, the money always tells a different story.

Bill Gates, Monsanto, and eugenics: How one of the world’s wealthiest men is actively promoting a corporate takeover of global agriculture

Please leave your comments, feedback and opinions below.